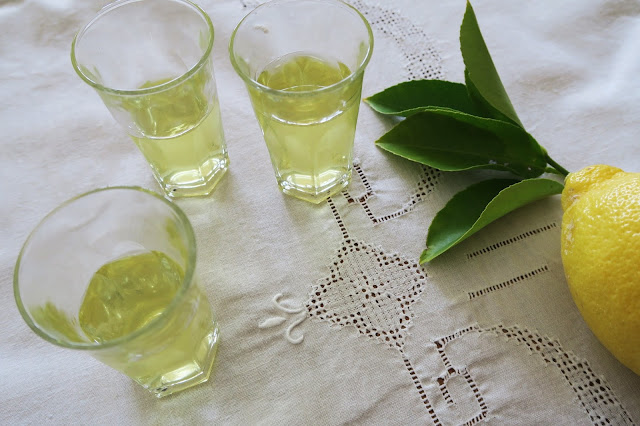 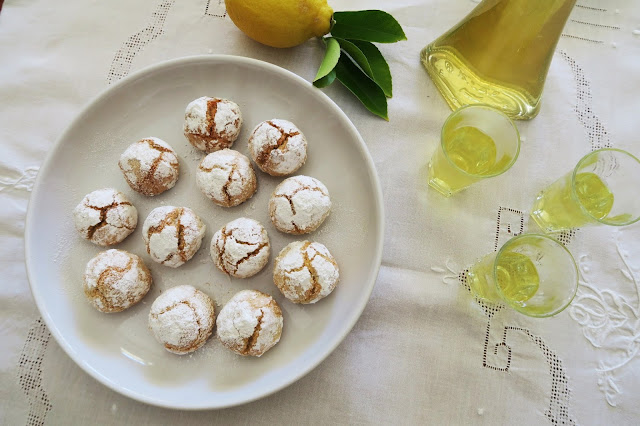 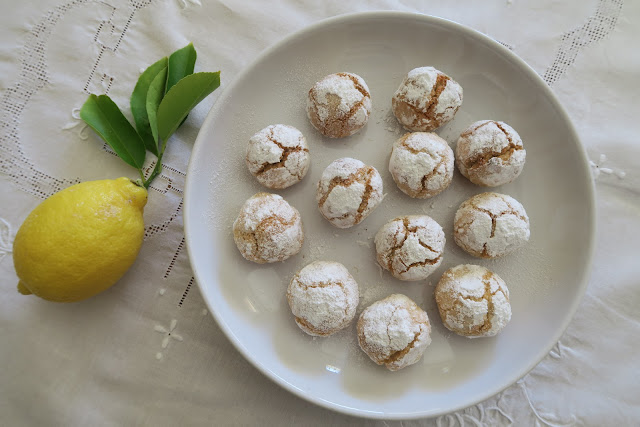 The enjoyment of having a pre-dinner drink to whet my appetite, or as Italians woul say - un aperitivo per stuzzicare l'appetito, is very much a tradition I experienced while holidaying in Italy. A quintessential Italian concept in step with their dolce vita and spirit that enabled me to connect with family and friends on my whirlwind visit. What grew in popularity in my parent’s and many Italian households here in Australia however, and what I am more accustomed to, is its sister drinks – digestivi (digestives). An excuse to extend the evening that little bit longer, a digestive is offered along with a few biscotti or walnuts placed on the table, perhaps a game of cards all in the best tradition of Italian hospitality. Digestives as the name suggests, are predominantly served to aid digestion and a lovely way of concluding a meal, but also known to be offered as a welcome drink served as small shots and sipped due to their high level content of alcohol. Their flavours are complex mixtures of herbs, roots, barks, berries, spices, flowers and citrus peels.  They are not overly sweet, and due to their general bitterness, are classified as amari.

This month’s Cucina Conversations topic is based around these two Italian rituals which play an important role in Italian social life. It is not only expressed through drinks but also related finger foods.   So while Italy is enduring a very hot summer and enjoying many aperitivi to remain cool before dinner, I’m dabbling in a little limoncello (lemon liqueur) making to serve as either a welcome drink or a digestive. I thought I would also share a recipe for sweet limoncetti that I will be making again to be enjoyed with this liqueur, in welcoming the long awaited spring in a few weeks and an upcoming family birthday.
The cristalliera (crystal cabinet) is where my parents have always kept their favourite and prized liqueur bottles, preserved cherries in grappa, or the bitter herbal amari such as the intensely flavoured amaro lucano from their region of Basilicata, the centerba, fernet as well as cynar.  And did I mention that mysteriously clear spirit in a non labelled bottle known as home-made grappa, that only in my adult years I came to learn of its origins?

So the story goes like this, my father would make his wine and the vinacce (pressed grape skins) would be passed onto his friend or my uncle who would distil it into this fiery spirit.  A bottle would then be gifted back as a thank you gesture to be used either in preserving cherries or sipped neat in good company and even added to the after dinner espresso known as caffe’ corretto. These age old traditions were passed on but have slowly faded with time and may I add, these were processes undertaken correctly. Making grappa at home is now illegal in Australia and known to be deadly if not produced correctly, so I don’t encourage any serious home brewing of this kind.  But a liqueur such as a limoncello is one that is very simple to make and well within the legal realm.

Most famously associated and produced from Sorrento, the Amalfi coast, and the island of Capri but popular throughout all of Italy, limoncello is also often made at home from steeping lemon peel in grain alcohol until the oil is released, and then sweetened with sugar syrup.  It has an intensely fresh citrus flavour and the degree of sweetness is adjusted depending on the base alcohol used. Papa` had his first taste of home-made limoncello made from those lemons found along the Costiera Amalfitana. This coastal road between the port city of Salerno and cliff top Sorrento winds past cliff side lemon groves; lemons that are ideal for this liqueur due to their thick uneven skin.  My cousin’s wife from Salerno had made her own bottles and served it chilled after a meal at a family gathering.  It was here that she shared the recipe, and inspired papa` to make his own using lemons from his tree and what would be the last of this grappa. 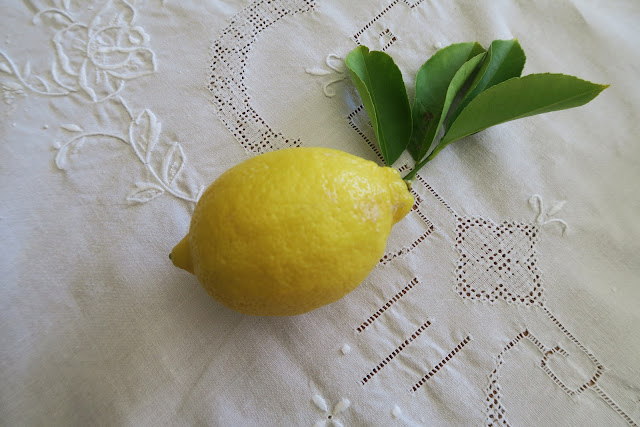 Notes on alcohol used:
The basics of the recipe are super easy but the only problem is that it needs a very high proof of alcohol content. Limoncello is normally made with a grain alcohol, but this recipe substitute’s with vodka or grappa, as it is more readily available.  It is not possible to obtain pure alcohol here in Australia and have read that in certain areas of North America, pure alcohol can only be sold to professionals who have a special license.  If you reside in Italy however, you may have better luck. Not only is it more accessible but cheaper in price as well.

Grappa is an alcoholic beverage, a fragrant grape-based pomace brandy of Italian origin that contains 35 to 60 per cent alcohol by volume.  Papa` made his limoncello with home brewed grappa; it's alcohol level was unknown. I made mine with store bought vodka and conclude that the grappa based is superior but vodka still makes a pretty good limoncello. When selecting the vodka that you are going to use, the higher the proof, the more lemon flavour your finished brew will have. Alternatively, leave the lemon in the alcohol to infuse double the time, and halve the amount of sugar syrup.

Notes on lemons:
When choosing the lemons, it’s extremely important to go for the highest possible quality. The best lemons are medium to large, with an elliptical shape and a thick peel such as the Lisbon or Eureka. The lemons must be untreated as the peel is what will be used, so organic lemons are the best. Any pesticides or even just waxing (commonly applied to help preserve the citrus’ moisture) would end up in the finished product. 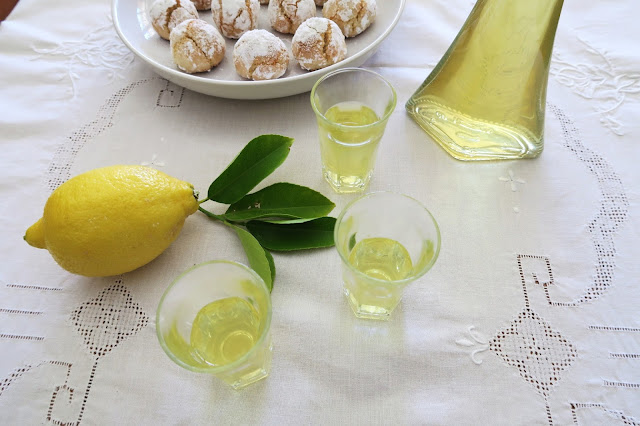 Gently scrub the lemons under running water, and then carefully remove the outer yellow coloured part of the peel using a vegetable peeler. The white pith has a bitter flavour and needs to be discarded.

The next step is to soak the lemon peel in the alcohol. Pour the alcohol in a glass jar with lid that can be closed tightly. Add the lemon peel, seal and then keep in a cool dark place for 5 days if using a vodka or grappa base, and half the amount of time for pure alcohol. The aromatic oils will gradually dissolve in the alcohol, which will turn yellow and fragrant.

Prepare the sugar syrup (according to alcohol base quantities given above) by bringing together the water and sugar and heat gently until dissolved, then let it cool off. Filter the alcohol to remove the macerated peel, and then add it to the syrup. Pour the mix of syrup and flavoured alcohol in a favourite glass bottle and seal.

Limonello is served chilled, and can be kept for up to 2 years in the fridge or even longer in the freezer as the high percentage of alcohol will prevent it from freezing. There are several recipes for aperitivi I have also come across using limoncello such as the Cocktail - Limoncello & Prosecco that I'll be trying during the summer months ahead. But before we drink a toast (fare un brindisi), there are some limoncetti sweets that also deserve a mention below.

Limoncello was used as one of the ingredients in making these amaretti – technically no longer amaretti as the name suggests, as the bitter almond essence was replaced with the limoncello and grated lemon peel.   This is an adaptation of my mother in laws amaretti recipe.  Makes 30

In a separate bowl, beat egg whites until stiff. Add the limoncello and mix through. Gently fold in the dry ingredients with the egg whites until combined.  The mixture should be firm but of a sticky consistency.

Add icing sugar in a separate bowl. Roll walnut sized amount of mixture into balls and coat in the icing sugar.

Place each ball on the tray, leaving some space between. They will not grow in size when baked, but will slightly puff and cracks will appear on the surface.

Bake for 10 to 15 minutes until just lightly coloured. They should not be overcooked as this will harden them. They should be slightly crusty on the outside and moist in the centre when cooled.

Join the rest of my fellow bloggers and check out their suggested aperitivi. Rosemary at Turin Mamma will share two respective recipes for negroni - the true and the less alcoholic cocktail drink known as the negroni sbagliato, while Francesca at Pancakes and Biscotti will make her polpette di melanzane as an aperitivo snack. Daniela at La Dani Gourmet will pair a glass of Bolgheri Rosato wine with some delicious marinated anchovies known as acchiughe alla povera, while Lisa at Italian Kiwi will make some mouth watering crostini with ricotta, figs and prosciutto; and Marialuisa at Marmellata di Cipolle will surprise us with some delicious finger food and talk about a prosecco made in Calabria. 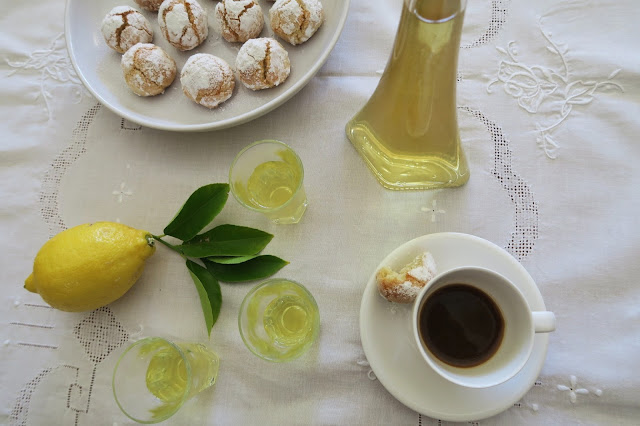 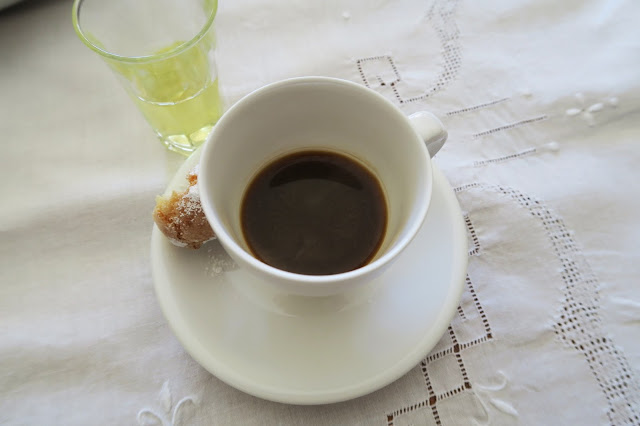