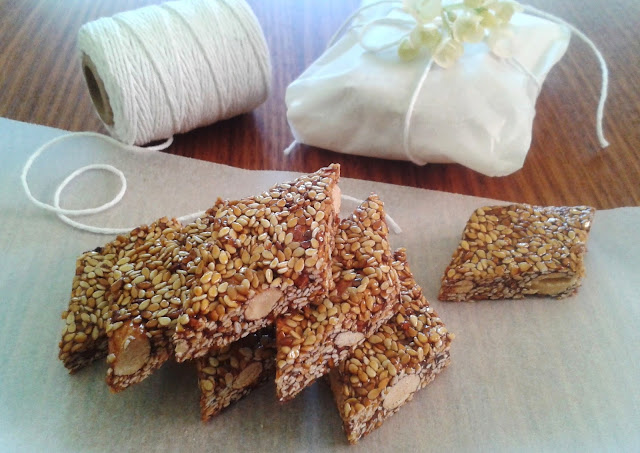 La giuggiulena or cubbaita in the Sicilian dialect, takes its name from the sesame seeds that are added to these sweet morsels.  It is the perfect sweet treat for Epiphany gifts, but traditionally in my family it is made and eaten leading up to Christmas time. Through this handmade delicacy, we see the Arabic influences on Sicilian cuisine in the use of sugar, sesame seeds, the orange peel and honey. We traditionally add almonds to this sweet, but if you have a preference for other nuts, I am sure that they would be just as delicious.  In fact when la giuggiulena is made in various parts of Sicily, rest assured that there are variations in how it is prepared.  Some like to use all sugar, while others like to add some honey. The honey makes it less jaw breaking when biting into it.  Other spices such as cinnamon or cumin have also been known to be added reflecting again the Arab influence.

This year I asked my sister in law Maria, to teach me how to make la giuggiulena.  I had watched my mother in law make it a few time and was overwhelmed by the labour intensive task of stirring the mixture, (she would make a large batch) working very quickly once it was ready to be spread, rolled and cut into perfect pieces - all before it cooled down on a marble tile. As my mother in law was well experienced in the making of this sweet, she made it look so effortless.  May I add that once she passed away, my sister in law had to try and work out quantities as there was never a recipe to follow.  So this recipe I share with you is her adaptation of her mothers recipe. 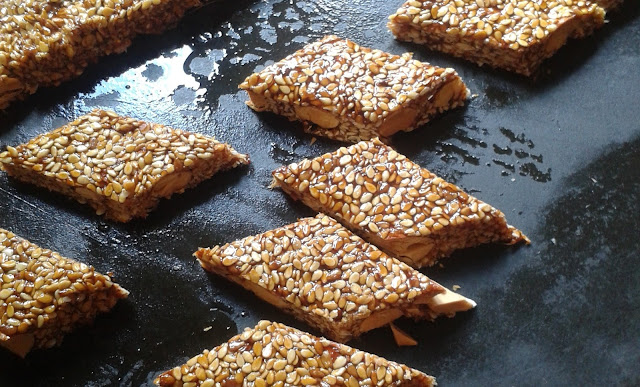 
The preparation time for this sweet is about an hour and requires your total attention. It is also important to work quickly when the mixture is placed on the tile, as it will cool down very quickly and become very hard to cut.

Place sesame seeds and almonds in the oven to warm at a low setting @130-140C (no fan).
Place sugar in a large heavy based saucepan over a low – medium flame on stove.  Make a well in the middle of sugar and pour in honey. Add long strand of orange peel (optional). The honey will begin to warm and simmer. Introduce some of the sugar surrounding the honey into the honey to encourage the melting process. Continue to combine until all sugar is melted. Continue to cook sugar until the colour becomes a deep caramel colour.

Remove strand of orange peel. Add almonds and sesame seeds. Periodically stir mixture ensuring that mixture does not burn. The sugar will continue to cook and darken in colour and the almonds and sesame will also cook in the mixture. Remove an almond from the mixture and cut in half to check if almonds are cooked. The almond should appear toasted all the way through, as should the sesame seeds. You may also see some fine threads from the surrounding sugar mixture as you cut the almond. Add the grated orange peel and mix through and cook ~ 1-2 minute. 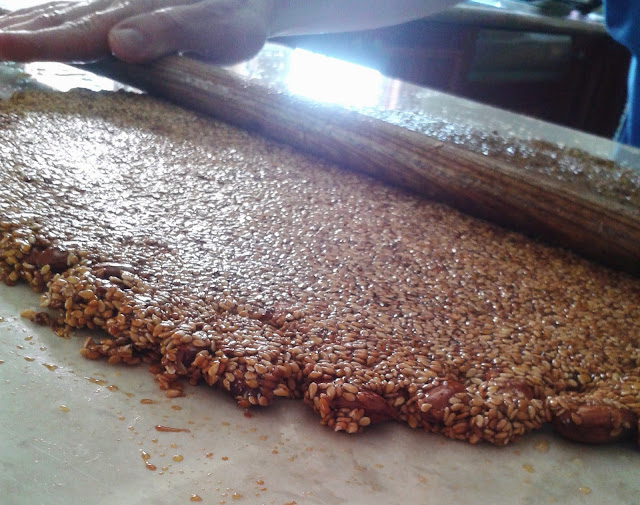 Wet marble or large tile. Spoon out mixture onto tile/marble. Using pre-wet rolling pin, flatten mixture. Wet hands with cold water and flatten mixture. You may need to clean and wash rolling pin throughout process. Once mixture has been flattened out you can proceed to cut 3 cm wide, long strips. Move these strips to another cutting board and cut into diamond shaped sweets. Knives being used may need to periodically be placed in jugs containing boiled water to be cleaned and then dried before continuing to cut the giuggiulena shapes. Once fully cooled, keep in an airtight container separating each layer with baking paper to stop them from sticking to each other. 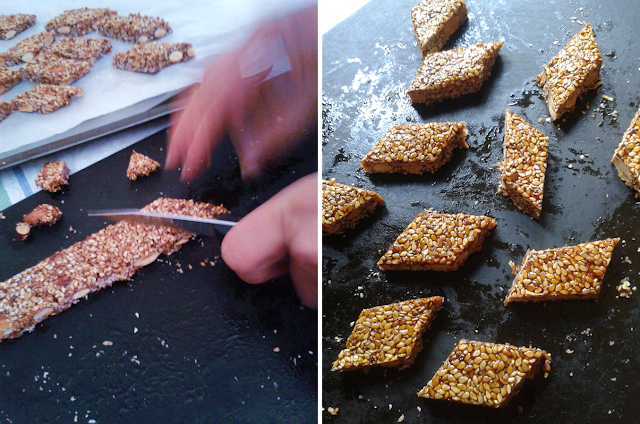 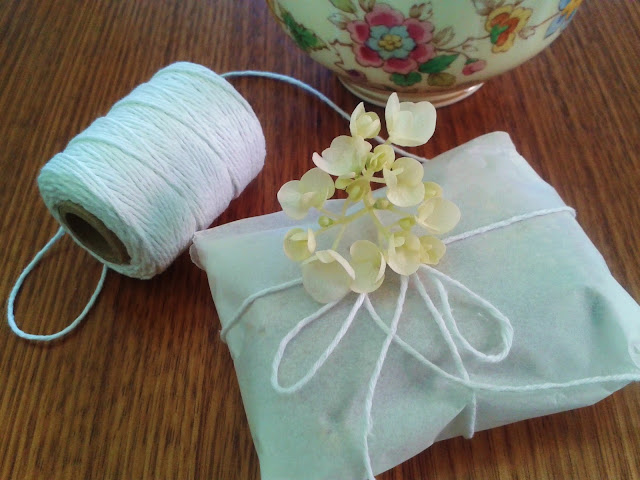 They do make lovely gifts and are great to have on hand when the relatives pop by. Enjoy!