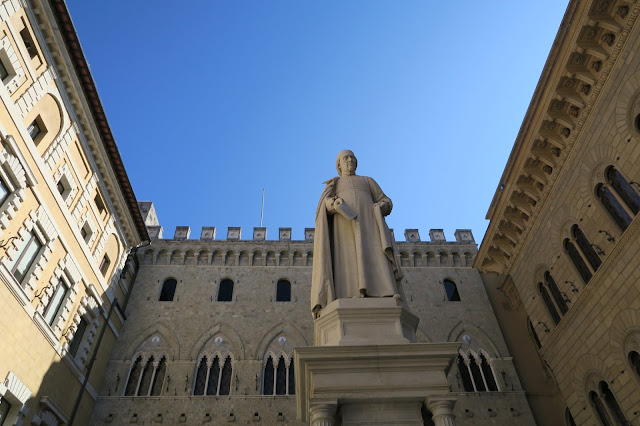 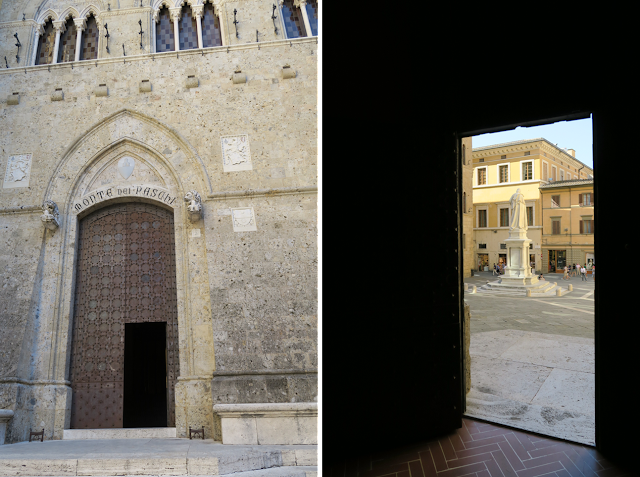 I have finally managed to sit down after the Christmas festivities and write Part II of my visit to Siena.  A quick day trip by bus to Siena which is on the outskirts of Florence is well worth adding to your itinerary and I would definitely return as there is so much to explore.  Panforte & Siena is Part I of my travels and can be found here. 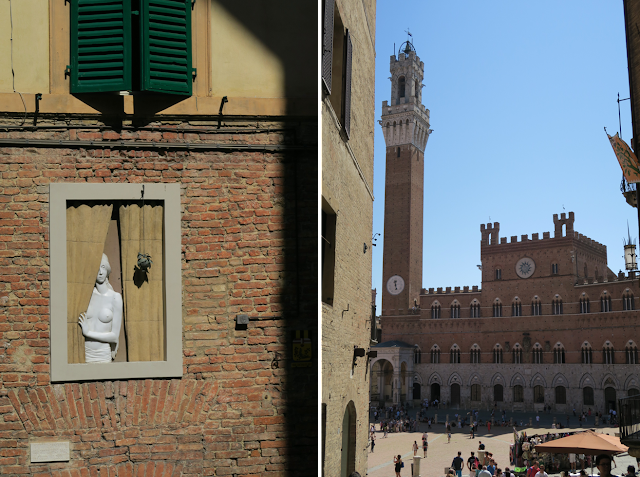 Siena is a beautiful city in Italy's central Tuscany. Some of its distinguished features are the medieval brick buildings, the fan-shaped Piazza del Campo that is dominated by the Palazzo Pubblico; the Gothic town hall and Torre del Mangia. The very high tower owes its name to Giovanni di Balduccio, who was its first owner. He was nick named 'il mangiaguadagni' (money eater) as he would often squander his earnings on the pleasure of food.

We took the bus from Florence directly to Siena and spent a day walking through the historic centre, the Cathedral of St Mary of the Assumption, in and out of bottege (stores) and of course eateries...feeling a little like Giovanni di Balduccio! 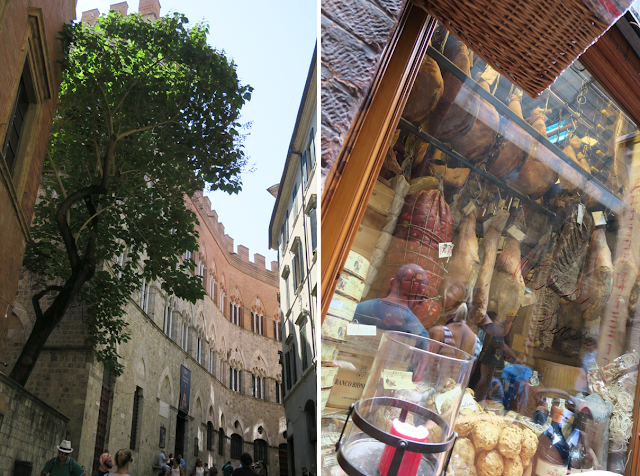 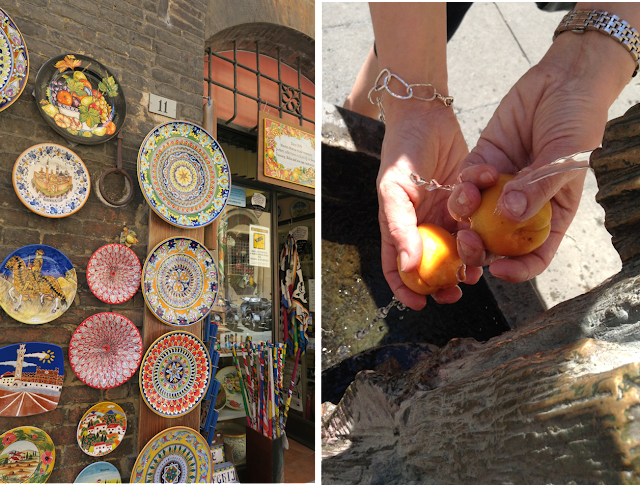 One eatery not to be missed if in Siena, is Antica Pizzicheria de Miccoli al Palazzo della Chigiana. Situated in a historic building that has been transformed into a deli is a foodies experience that cannot be overlooked.  It is the most photographed store in town...although quite ironic as it is apparently forbidden to take photos. 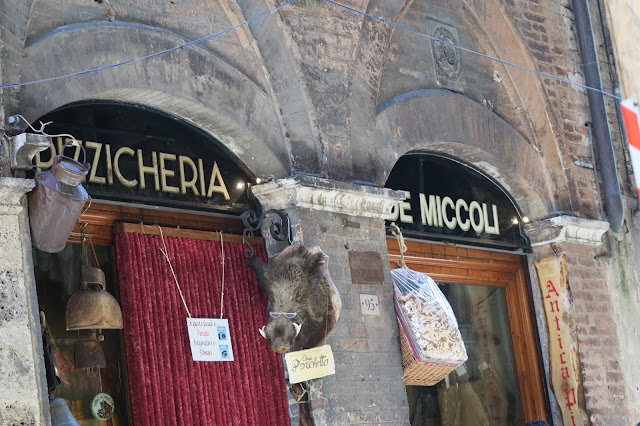 Antica (ancient/old) Pizzicheria (delicatessen) specializes in porchetta panini, (roast pork sandwiches) varied charcuterie, cheeses, dried porcini mushrooms, and other local delicacies including wine and bread.  There are fresh truffles and everything you can possibly infuse with this prized fungus.


As you walk through the door, you are greeted with an infusion of aromas, eye catching produce hanging from all angles of the store and two lively characters that offer you tastings to your hearts content.  You can buy produce like at a typical deli or choose to eat on the premises - either standing up against a narrow board laden with porchetta, salumi and choice of cheeses or standing outside in front of the store. 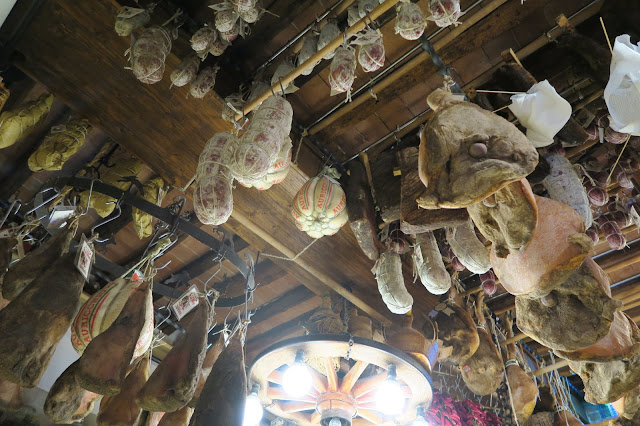 If you are fortunate to find a corner in the store as we were, you also have the pleasure of being entertained by Antonio. This character could sell ice to eskimos with ease... however, strictly "no foto, no video!" This was clearly posted inside and out of the store and verbally reiterated many times. A few people walked in just to take some photos and were swiftly shown the door, while others walked in and voluntarily walked straight out as they inhaled those aromas...clearly not to everyone's taste or sense of smell. There is a bit of a wait, as it is very popular, but if you are in a hurry, they package your goods for you to enjoy as a picnic lunch.

We were strategic - found our corner first, ordered, started up a conversation and then politely asked if I could take some photos...permission was granted. I only wished I had taken a selfie with this character, but managed to take some shots of the ambiance, what we ate and of course one of my sister in law looking quite satisfied with her experience... 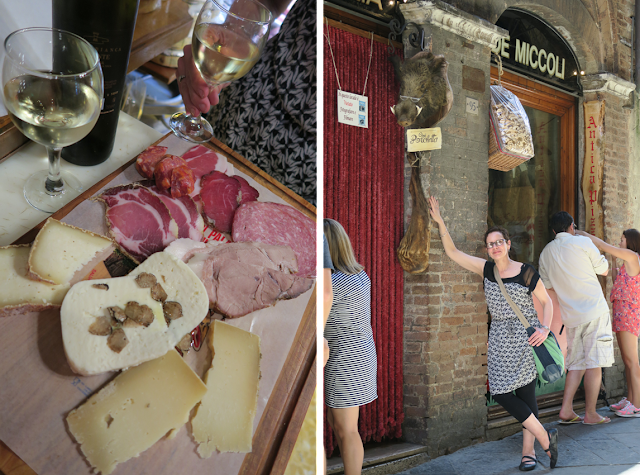 One aspect that we took away with us is the truffle aroma and taste.  Fresh truffle was liberally shaved on our serving of cheeses and infused within the salame di cingiale (wild boar). The taste still lingers in my mind.  So much so that there are plans for this coming winter to trial a small batch of salame infused with truffle oil.  Every year we make salame, of which I have written about here.

I bought some truffled salt as it is the next best thing along with truffled oil that one can easily come across or afford. Looking through endless recipes using these two ingredients has provided me with a few ideas for cooking projects.

So if you do plan to venture to Siena, are partial to salumi, cheese, truffle and wine, pop into Antica Pizzicheria de Miccoli al Palazzo della Chigiana and say hello to Antonio for me. 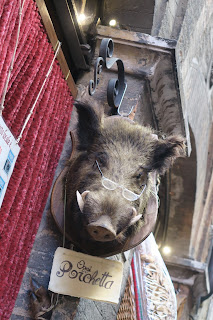