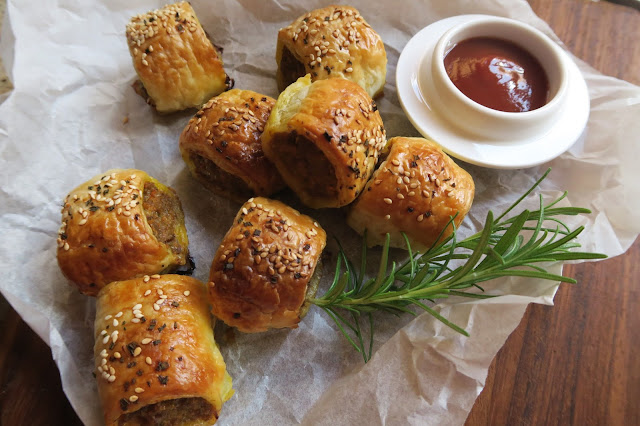 Australia Day is associated with all things 'Aussie' and a time to show our great sense of gratitude and pride.  Our multicultural society has evolved over time through the sharing of food and customs, but there are still a few things that remain very Australian. Along with the meat pie, the humble sausage roll has been served up at school tuck shops, birthday parties, sporting events, and even on Australia Day.

I first ate a sausage roll at the age of 7, two years after migrating to Australia. During school holidays  my mother had to work, so she would often come home for lunch as she worked in close proximity to home.  She would bring us a sausage roll each that had been purchased from the cafeteria.  At the time it was a comforting thought that I too was more Australian, even though at school my lunches were always very Italian. 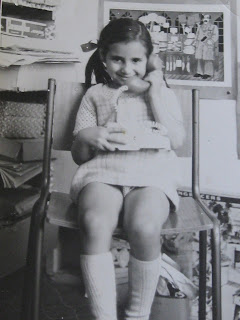 Like many migrants, the experience of leaving ones birth country to settle into another unknown land can be overwhelming.  That sense of identity and belonging is all of a sudden turned upside down.  Those that had families to migrate to, were far more at ease with the move, while others would feel that sense of displacement a lot more.

My family migrated to Melbourne, Australia in November 1970.  My mothers sisters had migrated in the 50's, sponsored by a family whom my grandparents knew from their town of Montemurro.  It was my mother who was meant to lead the way to Australia, but as fate had it, she met my father and married in Italy and so her sisters migrated first, one after the other.   Both my aunts met and married Italians who had also migrated to find a better life in Australia.  Many found their way to Australia through marriage by proxy as this was also very common in the 50's.  There is a beautiful Australian movie called Love's Brother set in Daylesford, that tells the story of migration to Australia, love and marriage by proxy. Others sent forward a family member to find work and settle before the rest of the family joined them. Which is what occurred with my husbands maternal family.

I suppose we were fortunate to have moved to Australia in the 70's and I can only recall some of the fears and sense of displacement as a child of 5 years of age. What remains vivid in my mind are some of the experiences that with time I have grown fond of and of which have shaped my appreciation of being an Italo-Australian.  The first such memory is starting school not only for the first time, but in a foreign country with no understanding of the language.  In tears, kicking and screaming I soon learnt at an early age that I had to adapt very quickly.

I remember the scent of the eucalyptus leaves in the playground, juxtaposed with the sweet scent of the Italian lemon tree blossoms in my aunt and uncles backyard when I returned home from school;  The smell of lunch boxes in the corridors where our bags hung and my lunch box filled with Italian food.  Milk bottles in crates sitting in the classroom ready for us at recess and my dislike of it; to find out later in years that I was lactose intolerant.  I soon adapted to the Australian way of life at school and made friends, but at home we were still very Italian. 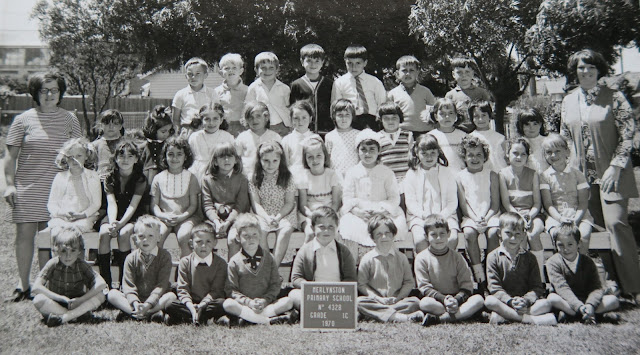 I was always quite shy and in my own little world, as can be seen in the above school photo taken the year we arrived in Australia. I was more preoccupied by my new surroundings, and with no understanding of the language I didn't pay attention when the photographer asked us to look forward and say 'cheese'. I remember this moment so vividly, the heat of the sun on my head and the intricate pattern of the girls dress beside me.

My aunt and uncle sponsored our first few months before my parents found work which meant we also lived with them. We lived close to the school and I remember my uncle walking  my cousins and us to school every morning.  To entice me out of the house, he would often promise us an ice-cream, a Peters Neopolitan ice-cream in a wafer cone. This was the closest to a gelato I can recall at the time - strawberry, vanilla and of course chocolate being my favourite.

My first taste of an  Australian breakfast was cornflakes served on the plane prior to our landing in Melbourne and then...Vegemite, to my great horror and dismay.  This salty spread was given to me by my cousins as my longing for Nutella on bread could not be satisfied.  Thankfully this experience was later sweetened with a few pieces of Cadburry chocolate filled with caramel.  These are only a few early recollections of my childhood years as a new Australian which I often think back to with fondness on Australia Day.

What could be more Australian than lamb on the BBQ?  I think a lamb sausage roll, so this is my take on the humble sausage roll. The recipe has been modified from a few other recipes that use various meat fillings or spices.  It has the added rosemary which many Italians add to their BBQ  lamb. The beauty of the sausage roll, is that you can make it your own to suits your individual tastes. 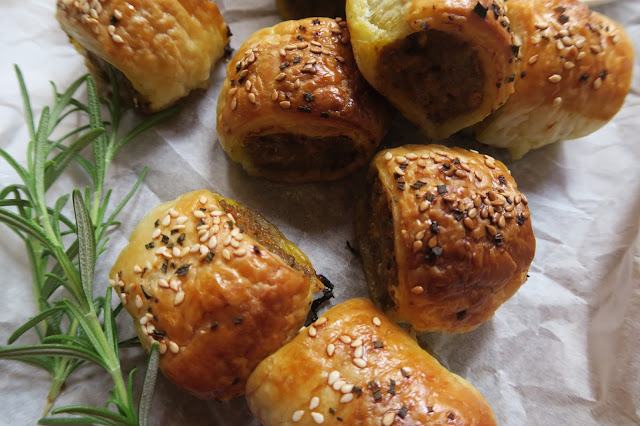 3. Place bread into a bowl and pour over the milk and allow to stand for 5 minutes.  Squeeze the bread to remove excess milk.

4. Add mince and bread to vegetable mixture together until well combined and season to taste.

5. Cut a pastry sheet in half, spoon a quarter of the mixture along one long edge.  Brush opposite edge with a little water.  Roll up, enclosing filling.   Repeat with remaining pastry and filling.  Brush rolls with egg wash and sprinkle sesame seeds and chopped rosemary. Cut into 4 pieces and transfer to a lined tray. Bake for 25 - 30 minutes in a moderate oven until golden brown. 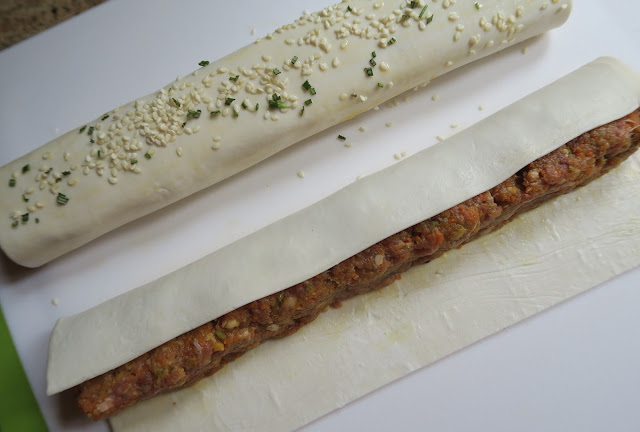 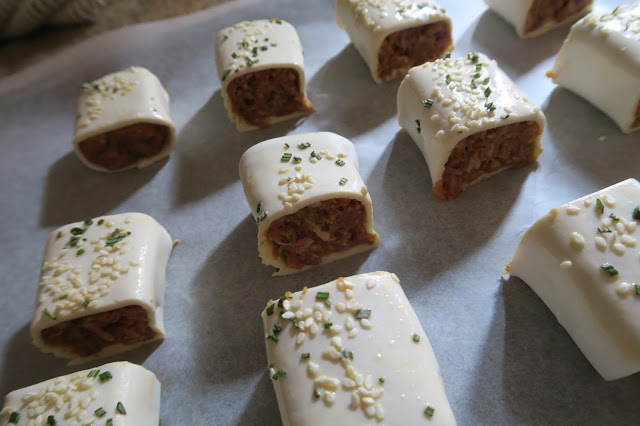 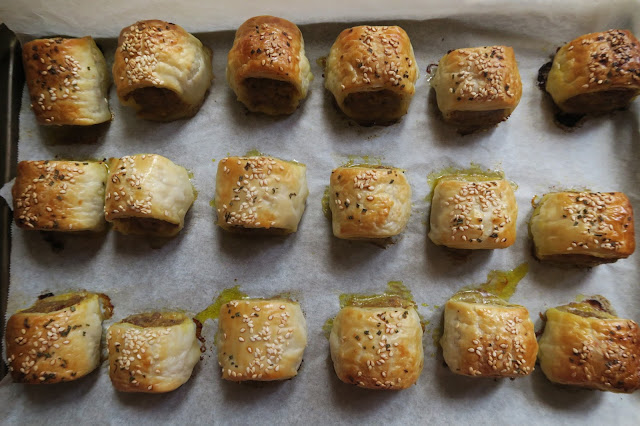 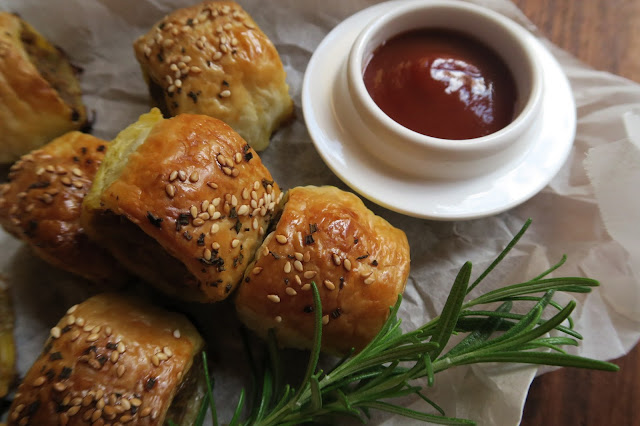 Serve with your favourite condiment - relish, or some Aussie tomato sauce.