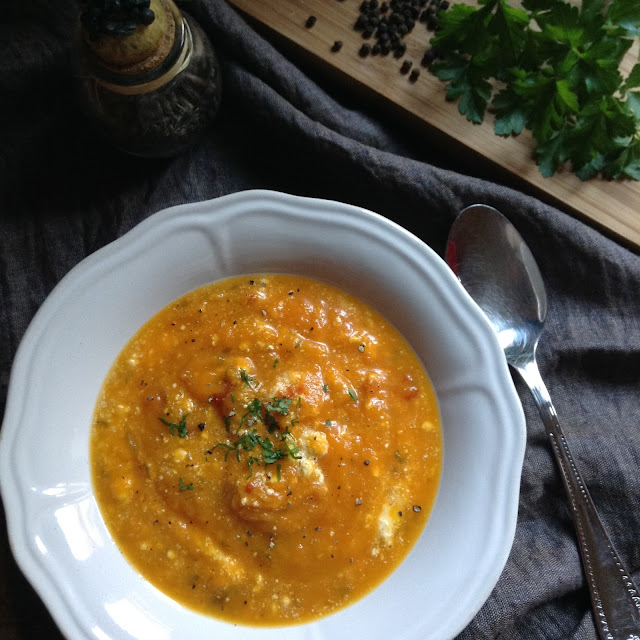 Having married into a Sicilian family, I have indulged in some gastronomic delights that have tantalized my taste buds but none have intrigued me more than this soup my mother in law introduced me to.  This peasant hearty pumpkin soup has become a favourite in our family and I would love to know if anyone else outside our family has made one similar.  It uses four main ingredients and there really isn't a strict recipe to follow in terms of quantities as it can be adjusted to suit your own taste and needs.

Our mothers cooked using informal measuring units, so this recipe has been re created in the same manner.  Over time I have increased or decreased the individual ingredients depending on what I had on hand, but always kept to at least the three main ingredients - pumpkin, ricotta and sun dried tomatoes. I have also made it without the hand formed semolina pasta of which this recipe takes its name from - pizzuliati.  You can use risoni pasta.  More about this hand made pasta later on as it is the fourth of the main ingredients to be added to this soup.

The quantities used below would feed four.

Pumpkin - 'Zucca'
Any variety will do, but I like to combine two types for added flavour. 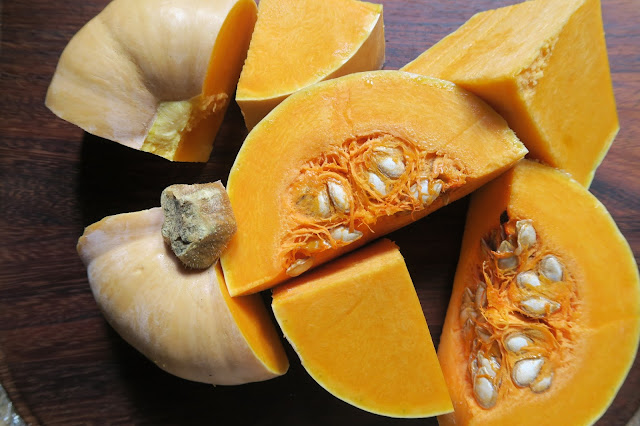 'Ricotta'
Ricotta adds the creaminess to the soup.  My in laws would often make a Sunday trip to Sunbury in Victoria,  which back in the 70's was still considered a country town.  They would buy their ricotta at the farmhouse cheese factory and use it in many of their recipes.  My husband would often tell me the story of their morning trips to Sunbury, where it would turn into a breakfast picnic.  They would bring along their kitchen pot and have it filled with hot ricotta to take home. While it was still warm, they would gather outside, pull out their picnic chairs and enjoy the ricotta for breakfast in the grounds of this farm.

Any good quality ricotta from your local delicatessen or cheese monger will taste just as good.  I used 180 g of ricotta which will be sufficient for the quantities of pumpkin used. This however can be increased or decreased to suit your taste. 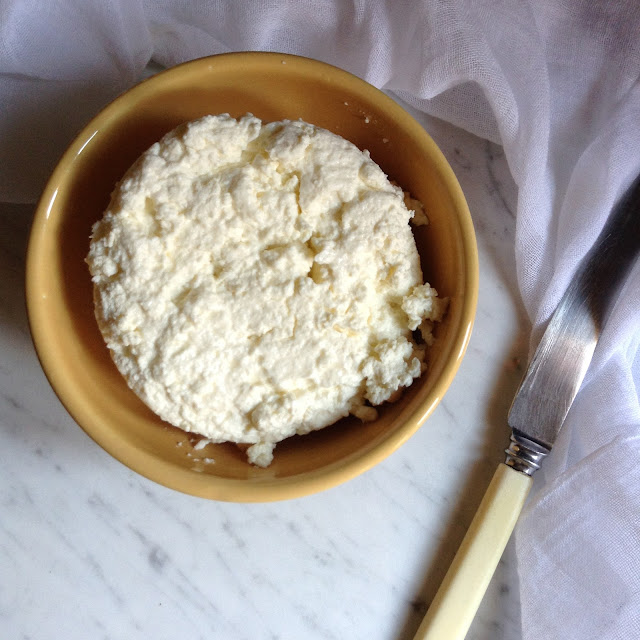 I used 6 sun dried tomatoes and cut them into small pieces. They will not only flavour the soup but also add flecks of colour. 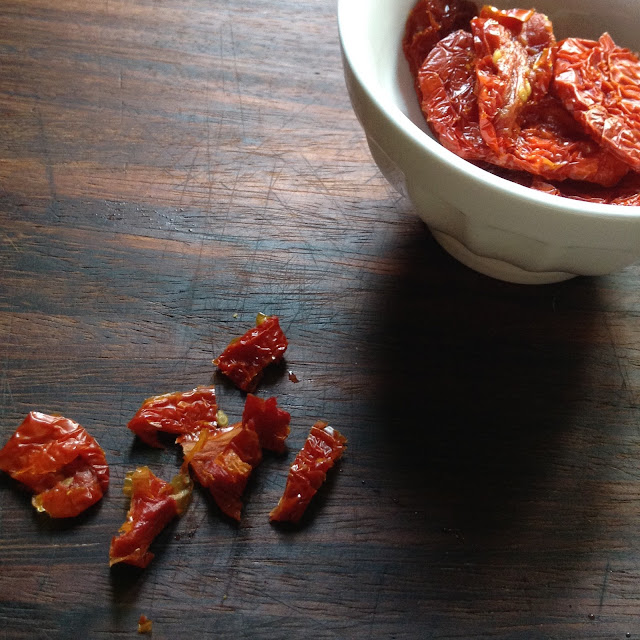 Handmade Semolina Pasta - 'Pizzuliati'
Pizzuliato is a Sicilian dialect name that comes from the word pizzico (pinch), which is how the small granules are formed.

All you need is 1/2 cup of semolina, 1/2 cup of plain flour and enough water to form the pasta dough.  Knead the dough until smooth and elastic.  Small irregular pasta granules are formed by pinching off small pieces and rubbing the dough though thumb and pointer finger.  The size of this pasta can also be modified to suit your taste. These are slightly larger than risoni pasta.  On a busy working day when I am time poor, I have used risoni pasta making the soup less rustic but still wholesome. 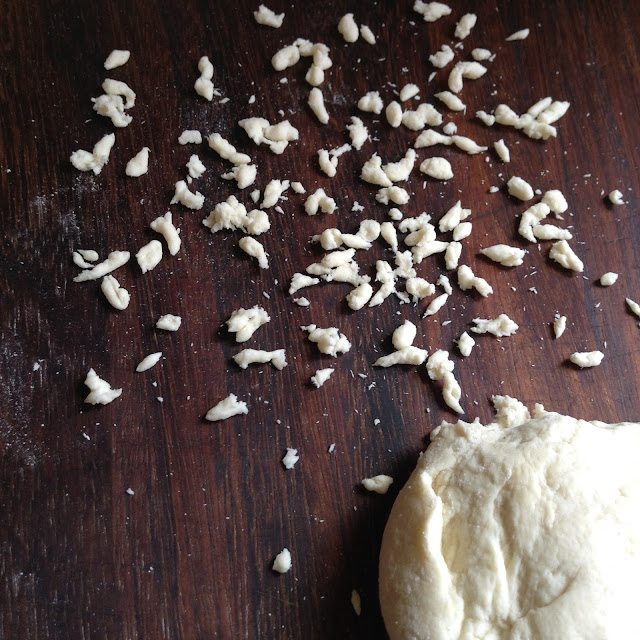 Peel, and cut into large pieces the two varieties of pumpkin.  Dice the onion, crush the garlic and place in a large saucepan - one you would normally use to make a large batch of soup in.

Add the cut sun dried tomatoes, whole parsley, oil, salt and fill the pot with water just enough to cover the pumpkin.   Many times I have used less water to achieve a thicker soup.  Place pot on stove with lid and simmer until all the ingredients have cooked through and flavoured the soup. The pumpkin will fall apart and become very mushy and thicken the soup.  Taste and add more salt if required.

Once cooked remove the parsley stalks leaving only the leaves in the soup.  The stalks were added for flavour, but need to be removed as the soup will not be pureed but roughly mashed with a fork or potato masher.

With a fork, mash the ricotta in a bowl and add to the pumpkin soup, stirring it through the soup.  The more you stir it through, the more it disintegrates and makes the soup creamy.  We like it slightly chunky. 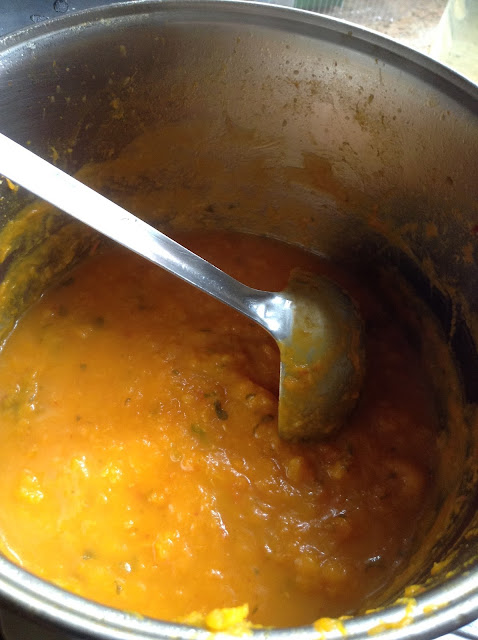 In a pot of boiling water, cook the pizzuliati - al dente, drain all the water and add the pasta to the pumpkin soup. My mother in law would cook the pasta directly into the soup making it a 'one pot wonder'.  At this point I like to add cracked pepper and when serving a sprinkle of chopped parsley. 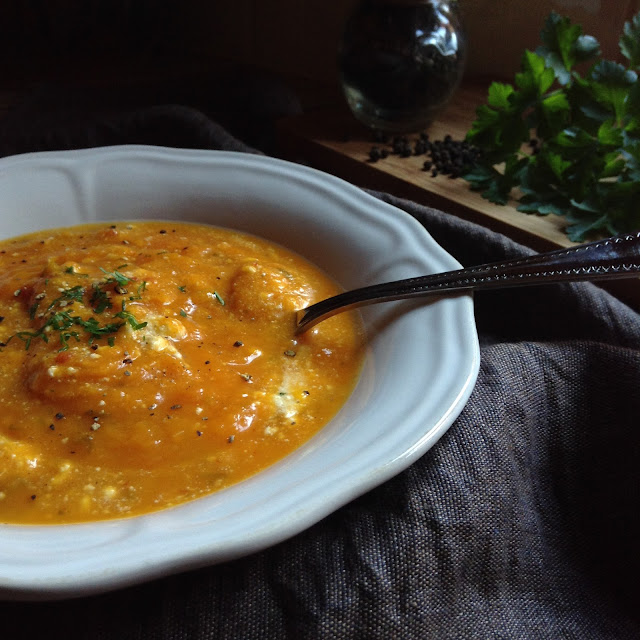 This rustic style hearty soup can be enjoyed during the cold winter months with some slices of crusty bread.