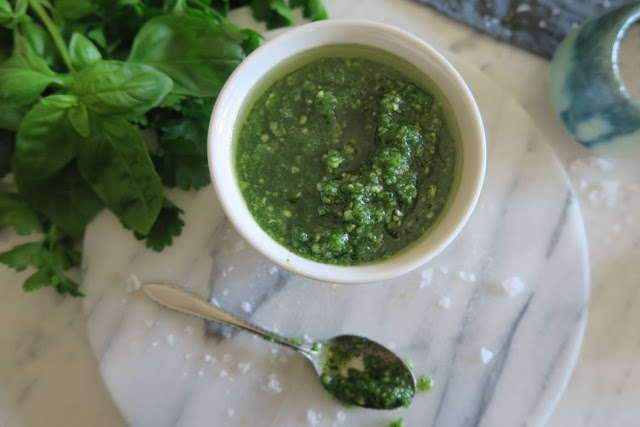 The arrival  of Autumn is filled with meaning in many cultures. In Italy it is associated largely with La Vendemmia - the grape harvest.   This autumnal activity has played a big part in my family - my paternal grandfather was, and my father still is a self taught wine maker, who has been making his own wine for over 40 years.  I have recounted his story and passion for wine in a previous post: 'Vino Vinello, Rosso e Bello'.  My grandmothers used wine in their every day cooking as it was readily accessible, and so does my mother in creating some of our most delicious regional meals and sweets.

Here in Australia it is Spring, far from harvesting time. Despite this, the different hemispheres do not stop us from gaining access to and cooking with the by-products of grapes, such as Vin Cotto which I previously posted on; nor this re-surged, un-ripened grape juice called Verjuice, also known as Agresto in Italian.    For me living in the Southern Hemisphere and entering Spring feels like a new lease,  a time of anticipation, new seasonal ingredients to cook with and a new venture that has blossomed from virtual friendships. It has introduced me to some talented ladies abroad, who like me love to cook Italian food and write all there is to know about it; and so #cucinaconversations has begun with a new season.

Cucina Conversations is introduced to you as a collaborative project initiated by seven like-minded women from around the globe coming together every month to share our passion for Italian seasonal food, its history and related recipes.   We are:
Rosemarie - of Sicilian and Calabrian descent, author of her blog Turin Mamma who also writes for Italy Magazine, originally from Sydney, Australia and now resides in Turin;  Marialuisa - who titled her blog Marmellata di Cipolle based around her notion on life - tears, sweetness, and adventures lives in Calabria;   Francesca - an Italo/American residing in Rome shares her passion for writing and cooking  via Pancakes and Biscotti; Daniela - a food traveller shares her culinary experiences  and recipes via La Dani Gourmet, was born and raised in Milan and now lives in Tuscany;  Flavia - born in Washington, DC and now living in Texas, shares her passion for Italian recipes on her blog Flavia's Flavors;  Lisa - a New Zealander married to an Italian and lives in France.  She writes about her passion for Italian cuisine and travel on her blog Italian Kiwi.  Finally there is me, an Italo/Australian,  who with a  sense of nostalgia will share  recipes and anecdotes from my Italian heritage.  Together, we hope to impart our love for Italian cuisine through recipes and related conversations.

For our first topic, we have chosen to talk about La Vendemmia a seasonal ritual of rich pickings that our land puts forward for us to enjoy, and is celebrated around the world during Autumn.   While the Northern Hemisphere is beginning to enjoy the more temperate days of Autumn and the fruits of its harvest, my fellow bloggers will share with you recipes that use ripened grapes as the main ingredient.  What better way to celebrate the season than with a cake called Torta della Vendemmia, or a Sorbetto all'Uva (grape sorbet), a Mostarda Siciliana di Mosto d'Uva (grape must paste), a grape jam called Marmellata di Zibibbo, Ciambelline al Vino (ring biscuits made with wine) or a traditional Tuscan focaccia bread called Schiacciata con l'Uva.  I on the other hand, am entering Spring, where new shoots have begun to appear on our Australian vines.  I have therefore chosen to talk about a by-product called Verjuice, that is extracted from unripened or un-fermented grapes.  This extraordinary versatile ingredient was introduced to me when I visited Maggie Beer's Farm  in the wine making region of the Barossa Valley in Adelaide, Australia several years ago.  I have to confess though that it is only in the last month through my research, that I have learnt about its varied uses in cooking and begun trialling different recipes. It is therefore only befitting that I share a recipe by Maggie Beer adapted from a Medieval Italian recipe for a sauce called Salsa Agresto.

Verjuice (Agresto) - Its History & Resurgence
Verjuice - vertjus (literally 'green juice') has a long and versatile culinary history  and according to Paul Hamlyn in his book Larousse Gastronomique, it was widely used as a sauce ingredient, a condiment, and in de-glazing. There is written evidence of its use as far back as 71 AD, at the height of the Roman Empire, when the juice was known as 'acresta', and later became known as 'agresta' in Latin, and 'agresto' in Italian.  It peaked again in Medieval France, in England as well as in Italy mainly as a seasoning ingredient in both cooked and uncooked sauces, and presented as part of or as an accompaniment to other dishes.  Research shows that verjuice was originally thought to have been made from the juice of unripe fruits and it was not until the sixteenth century that anyone thought of using the juice of unripe grapes for condimentary purposes.   Verjuice made from grapes is the version that has stood the passage of time.  Over time however, modern cooks would begin to use alternatives such as wine or various flavoured vinegar's within their cooking as they became more accessible.

There are many references in Italian books to agresto.  In The Fruit, Herbs and Vegetables of Italy, Giacomo Castelvetro suggests that at least a barrel of agresto was made by every family with an acre of land.  According to The Oxford Companion to Italian Food by Gillian Riley, reference has been made to the use of agresto in the new cuisine of the Renaissance in a simple chicken dish called 'pollo in agresto'.  Freshly squeezed un-ripe grape juice along with chopped herbs was used to finish fried chicken before it was served.  Chef Bartolomeo Scappi served his employer Pope Pius IV fried frogs' legs that were accompanied by a sauce made from agresto and egg yolks; and  as an aside, Paolo Petroni writes in The Complete Book of Florentine Cooking 'that tradition endowed this sauce "agresto" with great powers'.  He goes on to explain that agresto 'was an aphrodisiac, a pain killer, a disinfectant and helped mothers to be to give birth'. Furthermore suggesting that agresto - verjuice was at one time an entrenched part of Italian life.

The modern resurgence of verjuice can be accredited to our very own South Australian cook, vintner and food writer - Maggie Beer.  Maggie has popularised the use of verjuice in her cooking, and she was the first to produce and sell it commercially, initially in Australia and now around the world with other vintners to follow her footsteps.   Much research on how to create this juice led her to three readings that provided some insight into the making of verjuice, one of which included Elizabeth David's book, French Provincial Cooking.  From these readings, Maggie Beer was able to experiment and come up with her own method of producing verjuice using her grapes from the Barossa Valley. Since then, Maggie has cooked with and developed many recipes which extend the use of verjuice in sweets as well. 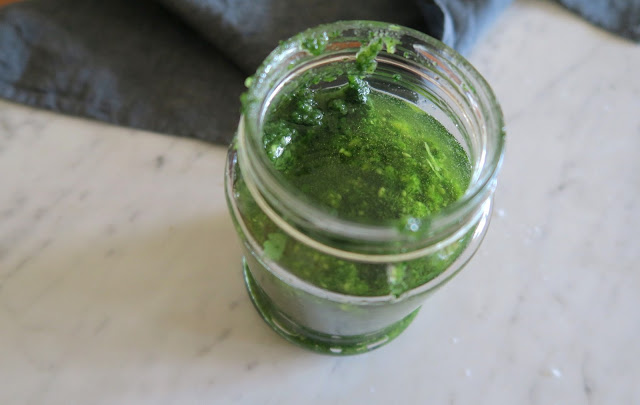 Maggie suggests roasting the nuts before using them in this salsa.  I prefer the natural flavours of the almonds and walnuts, so I omitted this process.  If you wish to roast them, then preheat the oven to 220° C. and place the almonds and walnuts on separate baking trays to roast for 5 minutes, shaking to prevent burning.  Rub walnuts in a tea towel to remove bitter skins, then leave to cool.  Blend the nuts, garlic, herbs, salt and 6 grinds of black pepper in a food processor with a small amount of the oil.  With the motor running, slowly add the remaining oil and verjuice.  The consistency should be like pesto.  (If required, thin with more verjuice.  The sauce turns a brilliant apple green, but will oxidise within half an hour due to the added acidic juice.  The secret is to add the verjuice just before serving the sauce.
Maggie suggests eating it with toasted bruschetta and goats cheese, which I'm certain would be devine.  We ate some of the sauce on slices of crusty fresh bread and the rest was placed in a clean jar with an additional thin layer of olive oil to preserve the colour, tightly screwing the top and  kept in the fridge for a few days for other uses.  I will be spooning it on Portobello mushrooms and baking them in the oven. This salsa agresto enhances the flavours of any meat when used as a seasoning during the cooking process or can add freshness when served on the side of meat as a condiment. 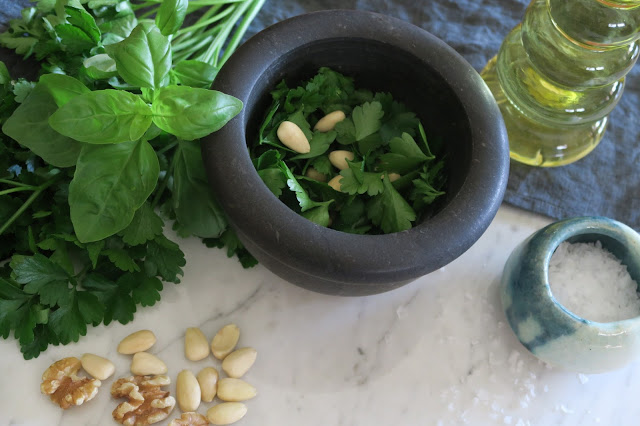 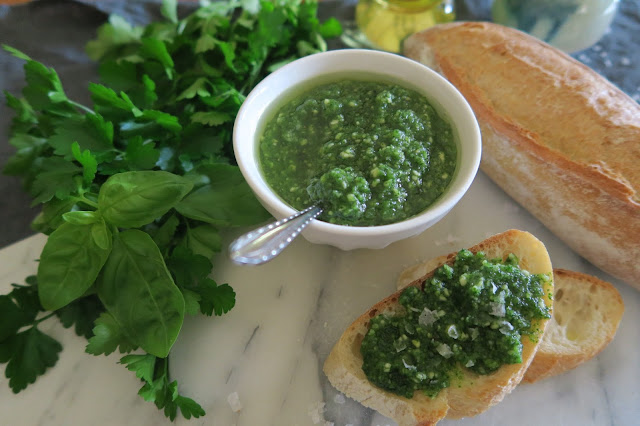 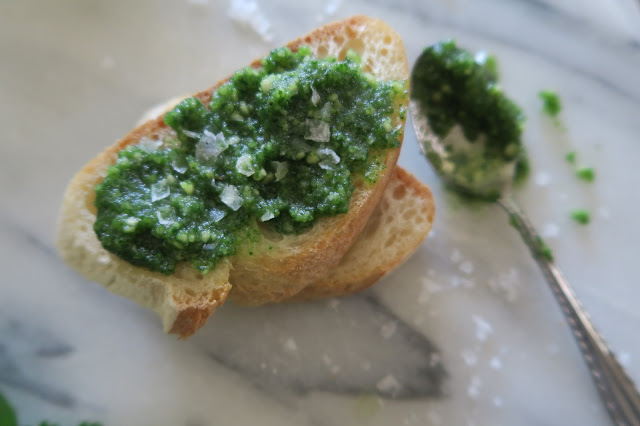 Remember to check out the rest of the Cucina Conversations bloggers' insights into La Vendemmia and just to make sure you don't miss our other wonderful posts, you can also follow our social accounts by clicking on the links above. 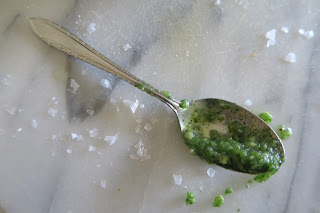