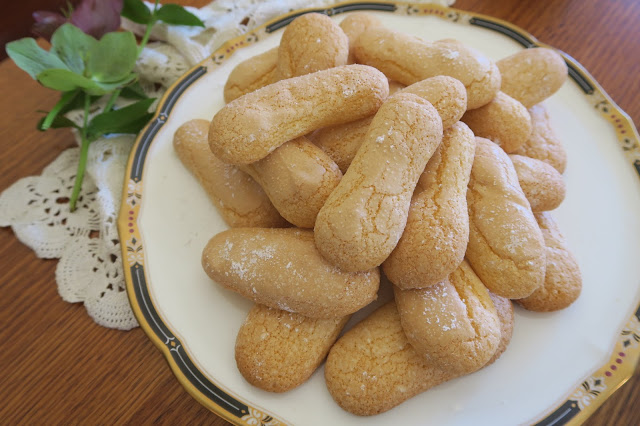 Food is an important part of the Italian culture, so enjoying a meal with family and friends would have to be the main ingredient of any Italian dish.  Memories are created each day we gather around a table or on special occasions and intertwine with the flavours and aromas of dishes cooked which continue to linger on in our minds.  There are many dishes that remind me of meals shared with my grandparents and family especially those associated with religious festivities.  Another pillar of the Italian food culture is regional diversity, and with every dish, simple or complex, we can trace its roots to the past and traditions of that particular region.  So with these thoughts in mind, this month the bloggers of Cucina Conversations will focus on the gastronomical traditions of a special event that we are nearing on the Christian calendar known as Ognissanti (All Saints' Day).  Remembering saints and martyrs and dedicating a specific day to them each year has been a Christian tradition since the 4th century AD.  Research tells us that Pope Gregory IV extended the festival and designated November 1st as the date for Ognissanti, also known as I Santi which collectively celebrates all of the Catholic saints.  This day is then followed by I morti (All Souls' Day) on November 2nd.

The significance and traditions of this religious event will be recounted by my fellow bloggers, and feature recipes that are either symbolic of this event, seasonal around this time of year or have a connection / memory with someone dear to us, such as these savoiardi biscuits I will be sharing with you in memory of my maternal grandfather, affectionately known as nonno Rocco.  Saint days and religious festivals are celebrated with their own specific ingredients and regional dishes that are not only traditional, but symbolic. Rosemarie will make castagnaccio and Daniela necci con ricotta - both recipes use chestnut flour and typical of their region.  Lisa will share a biscuit recipe called fave dei morti (beans of the dead).  These biscuits are named as such as they were roughly shaped to resemble beans, as beans were used in symbolic dishes and offered to the dead - a ritual that stems from Roman times, later adopted by Christians.   Marialuisa will be making her grandmothers' biscuits called nzudi or nzullotti, while Flavia will be baking a seasonal apple crumble cake called torta sbrisolana.  Francesca has selected two seasonal ingredients and will dish up a plate of pappardelle con zucca e porcini, as pumpkins and mushrooms are in season in Italy around this period of time.

It was only through my Catholic upbringing and living close to my maternal grandparents once they moved to Australia that I have experienced these two religious traditions and have come to associate these rituals with certain customs.   Growing up in Australia, my memories of this time involved going to church to honour the Saints and remembering those close that had passed.  In Australia, both these religious days are celebrated by Catholics, but unlike in Italy, they are not given their own public holiday and therefore are less festive.  So my memories of these days are solemn and more recently since my maternal grandparents and in laws have passed, this day is spent going to the cemetery to pay visit, bring flowers and remember those days spent together.
My maternal grandparents migrated to Australia 10 years after we did due to the devastating earthquake in the 1980's that hit their small town Montemurro, a province of Potenza in the Southern region of Basilicata.   It is through my grandparents and more recent recounts from my parents that I learnt about the old customs around this religious festival.  Back in Italy, my grandmother would offer a meal - usually the main meal (primo piatto) to a poor local and she continued this tradition in their town every Sunday as a charitable cause.  This dish usually consisted of a bowl of soup or some homemade pasta.
My fathers’ recounts of his experiences  as a child growing up during the war are somewhat humorous.  At a very young age along with his friends they would go door knocking with an empty plate chanting: per i vivi o per i morti (for the living or for the dead) asking for their plates to be filled. I guess similar to trick or treat in more recent times.  They were offered spoonsful of cooked legumes such as faggioli (beans) or fave (broadbeans) as these were the staple ingredients and meals cooked around the autumn period.  The offering was intended for a deceased relative to be left on their grave, a ritual typical of the Basilicata and Calabria regions of the times, but being young boys they chose to eat the offering themselves without their mother knowing.

Sweets typical of the Basilicata region that my parents remember are ossi dei morti (bones of the dead) biscuits made with almond meal, spices and egg whites; grano dei morti also known as cicc cuott, which is a cooked grain allowed to cool and then tossed with pomegranate kernels, chopped walnuts and chocolate and seasoned with vino cotto and spices.  My paternal grandmother would make her children morticelli also known as torrone dei morti, a small cluster of almonds cooked in sugar and cocoa, a sweet still made today by my mother. All these names use the word 'dei morti' (of the dead), hence representative of this period of time. 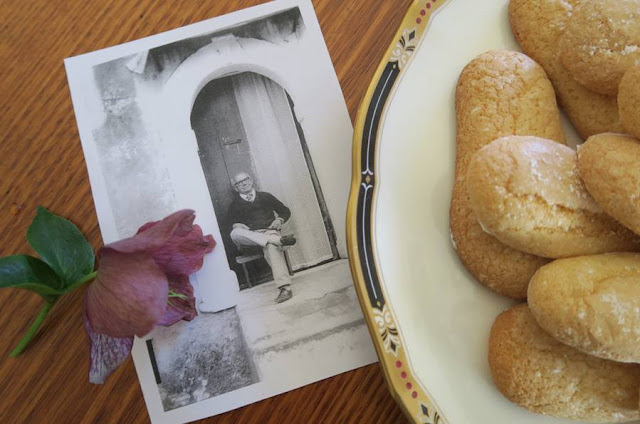 It is through food and the memories evoked that we remember and commemorate the lives of our loved ones.  There is always a special dish that they cooked or liked to eat that brings back memories, so I will be sharing a recipe for savoiardi - a biscuit my grandfather loved.  Nonno Rocco had quite a sweet tooth and loved the fact that these biscuits were soft and very light, allowing him to eat more than one.  So these biscuits are dedicated to him - in memory of my sweet nonno.   This photo was taken in 1979 by my zio Filippo before the devastating earthquake and consequently their big move to Australia which brought them close to us. 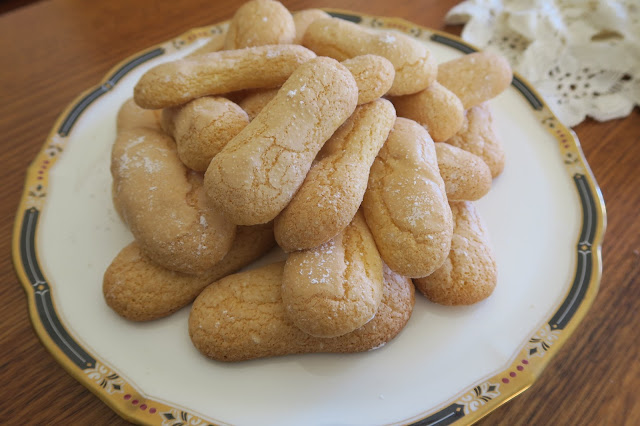 These light sponge fingers are lovely on their own, but known to be dipped in coffee or a sweetened wine and used as a base for deserts such as tiramisu.

Preheat the oven to 180 degrees, line 2 baking trays with baking paper; you will need a piping bag with a plain nozzle approximately 1.5 cm in diameter or near enough.

Whisk the yolks and 2 tablespoons of castor sugar until light and fluffy for about 5 minutes.  Sift the flour and cornflour in a separate bowl. In a clean bowl, whisk the egg whites to a soft meringue, then gradually add the salt and 80 g of sugar.  Fold a third of the meringue into the yolks, then a third of the sifted flours in alternate lots, gently folding the mixture until all flour and egg whites are combined with the egg yolks.

Transfer the mixture into the piping bag.  Sift some icing sugar on the baking trays and pipe about 12 biscuits per tray, 8 to 10 cm long. Dust the savoiardi with icing sugar, allowing it to soak into the biscuits and then place in oven to bake for 15-25 minutes depending on the degree of dryness you prefer.  Allow them to cool before separating them carefully from the baking paper. 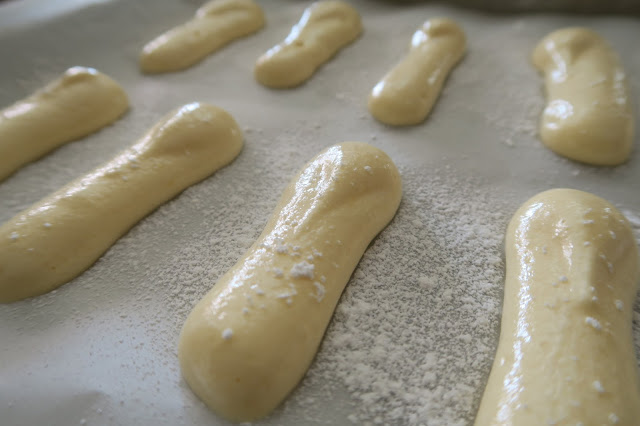 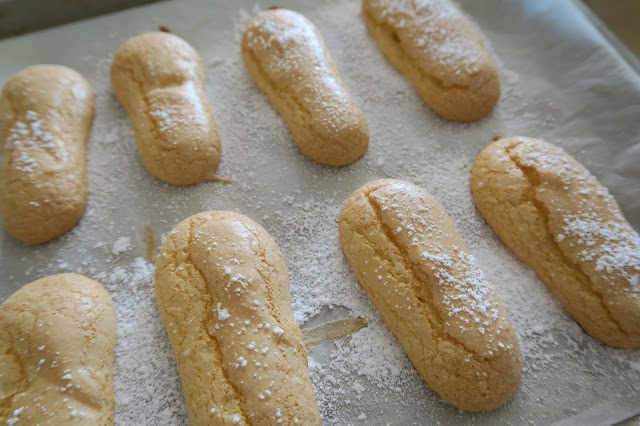 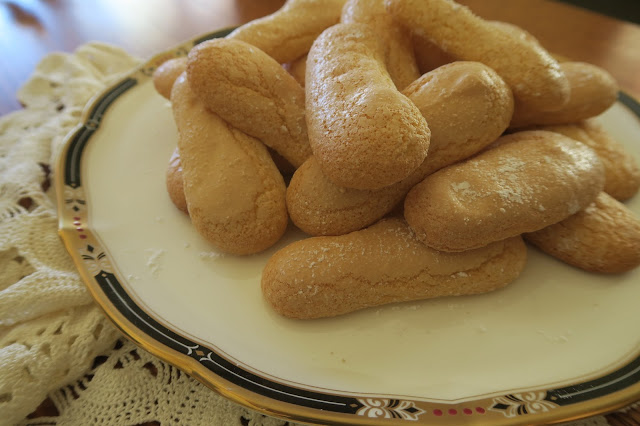 I hope you enjoy these sponge biscuits as much as my nonno Rocco did.

Remember to follow the discussions with the Cucina Conversations girls who will be posting throughout the week and learn about some traditional recipes linked to this months topic Ognissanti.
Click on their link:
Rosemarie at  Turin Mamma
Daniela at La Dani Gourmet
Lisa at Italian Kiwi
Marialuisa at Marmellata di Cipolle
Flavia at Flavias Flavors
Francesca at Pancakes and Biscotti