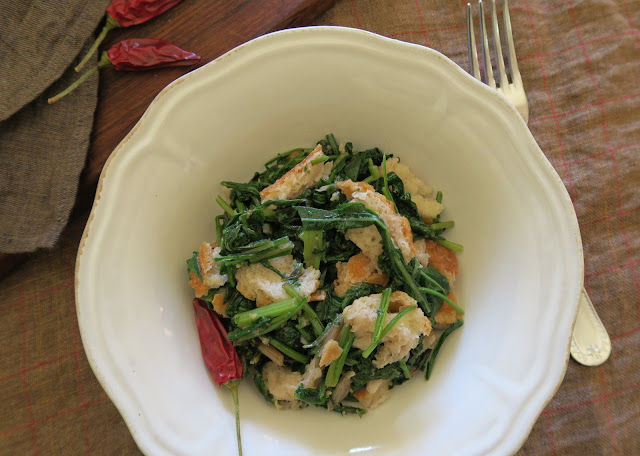 Welcome to my long overdue addition to The Heirloom Chronicles blog titled Wild Harvest.  This personal blog would not be what it set out to be without reference to and inclusion of mamma's favourite part of the garden and wild greens. A keen researcher of all things herbal and remedial with most of her favourite readings based around these topics; mamma has been my inspiration for this extension of discovery and learning which ties back to 'cucina povera' (peasant cooking).  Amongst their seasonal vegetables, you are bound to find some strange looking erbe (herbs) or wild edible greens that have been selectively planted or just happen to sprout from a neglected corner of their orto (garden).  Ask mamma what they are and she will happily engage in conversation with you about their medicinal values and how to prepare brews to remedy this and that. The inclusion of these greens into her cooking is not unfamiliar to us growing up, so this new section will be filled with informative readings and interesting recipes that will encourage you to explore different flavours and reap their health benefits too.


We begin with a perennial bitter green called cicoria (chicory), that mamma has allowed to grow naturally in her garden and continues to cultivate.  A culinary heritage which was transported over the seas with migration, and for many Italians in Australia not only does it remind them of their origins, but remains a staple in their traditional Mediterranean diet. Italian immigrants who came to Australia must have been overjoyed when they discovered the presence of wild chicory which both surrounded and dotted their urban habitats.  Accustomed to a simple agrarian lifestyle and to scarcity, I am certain they delighted in the realization that they could simply walk to the nearest empty field or suburban park, carving knife in hand, and pluck as much of the leafy green as they could carry. True, not everyone appreciates wild chicory, some despise not only its bitter taste, but also the customs surrounding its harvest and consumption. I recall my mother engaging in such practice and invariably me feeling a little embarrassed that this should happen while out enjoying a family picnic; harvesting chicory outside of our own backyard was simply not cool. 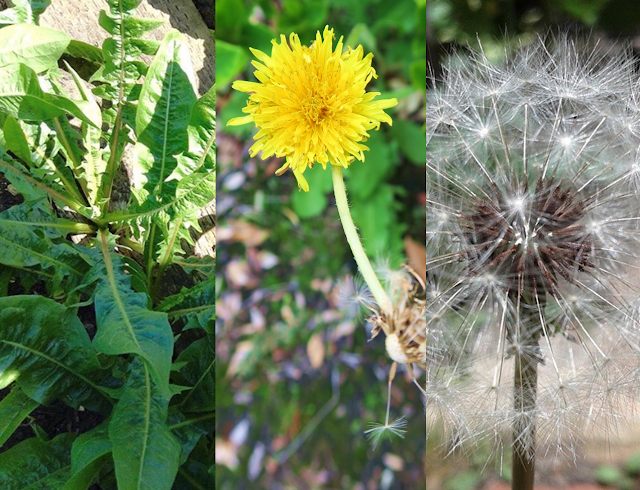 Wild chicory comes in at least two varieties: Tarassaco (Taraxacum officinale) a large genus of flowering plants in the family Asteraceae which consist of species commonly known as dandelion that sprout yellow flowers. The leaf may also be confused with Cicoria (Cichorium Intybus) part of the dandelion family but with bright blue flowers.  Mamma grows both varieties in her garden.  In Italian, also known as dente di leone (lions tooth), soffione (dandelion puff), piscialetto (bed wetting - due to its diuretic effects), ingrassaporci (pig fattening - as it was also used as feed for pigs), or more commonly known as cicoria selvaggio and cicoria burda (wild chicory). According to research it has a long and ancient history associated with its cultivation that spans a few continents. Appreciated by many cultures, it was a native plant of Western Asia, North Africa and Europe, originally cultivated by medieval monks to extract a tonic for the treatment of gallstones.   It was classified as an age old herb that was used medicinally well before making its way on our dinner plates.

Mamma uses it religiously and simply swears by its health benefits and still to this day informs us of its purifying and anti-inflammatory properties - rich in nutrients, minerals and anti-oxidants, and insists on the importance of including it in our diet.    According to her research, the dandelion leaves and root help purify the body; helps stimulate the bile, hepatic and renal function, activating the excretory organs (liver, kidney and skin) for the processing and elimination of toxins.  She uses the leaves in various recipes, drinks the water in which the greens are boiled in and uses the root in various brews.

Chicory has been known as a mainstay of the 'poor kitchen' – traditional Italian food that is simple to prepare, nutritious, tastes great and avoids waste. It was, and to a large extent remains a staple of the central and southern Italian table.  It is a standard cooked green commonly sold at mercati (markets) along with other wild greens all over Italy. In fact chicory has become a fashionable 'foodie' obsession available at well known restaurants and gourmet markets everywhere. It has a pleasing bitterness that can be removed by giving it a first boil before using it in a dish unless using the very young leaves. I love its bitterness and choose to just sauté with a small amount of oil, and by pass the boiling stage completely.  If you cannot find chicory at your local market, dandelions from your garden make a lovely substitute and as can be seen in the photos below, both varieties have been picked from mamma's garden and used in this dish.  The days not long ago when picking chicory was a source of embarrassment seems far behind me now and I am even considering giving up weeding and letting them grow in my garden. 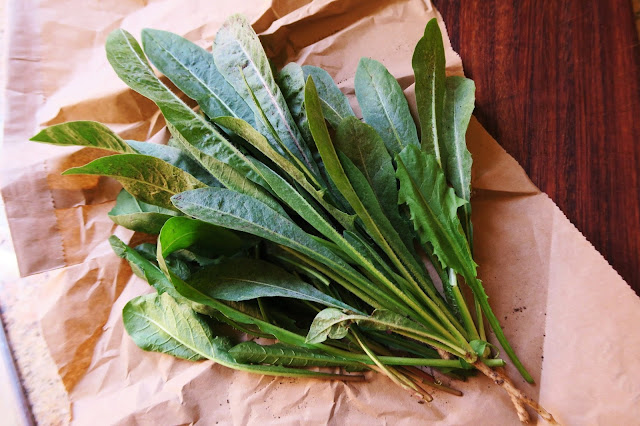 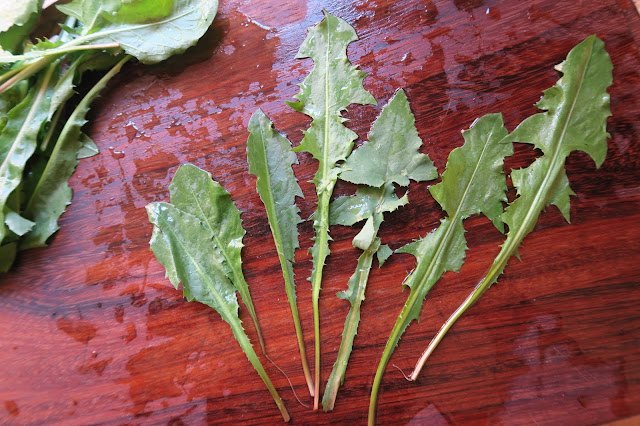 There are many delicious recipes using this wild bitter green, many of which I have eaten growing up, notably the Roman cicoria strascinata / ripassata (bitter greens with garlic and chilli).   There is also a nice complement to be had between a bitter green and a creamy subtle bean such as the white cannellini which works nicely with dandelion greens adding that extra flavour and nutrition.  Another favourite of mine is combining chicory with a mash of potatoes and turned into crocchette di patate e cicoria (potato and chicory crocchettes) - my recipe selection for our Cucina Conversations round table coming soon this month.  For this post I have chosen to share mamma's favourite way of eating cicoria which I am certain my grandparents ate during those leaner months of the year and that is in a dish called pane cotto.

Il pane cotto or in papa`s dialect, pane cuott', would have to be the poorest dish in the south of Italy, born out of scarcity and whose closest cousin is the better known and richer in ingredients, Tuscan dish called 'pappa al pomodoro' (tomato & bread soup).  This dish however only uses four main ingredients - stale bread, chicory, garlic and olive oil. It can be prepared with any wild greens adding the bitter undertones that cut through the only rich ingredient - the olive oil that it is sautéd in. The wild greens can be substituted with silverbeet/chard, Tuscan kale or any other green that holds itself firm without becoming too mushy.  For those who want to enrich this dish, it has been known to make a hearty winter meal with the addition of beans and cooked in stock. In times of extreme poverty, this dish was hailed as the savior to hunger and ultimate death. As a famous southern Italian saying goes, 'Se non era pu' pane cuott', u'cafone foss' muort.' Translated in sweeter terms, 'if it wasn't for il pane cotto, the poor peasant would be dead'. 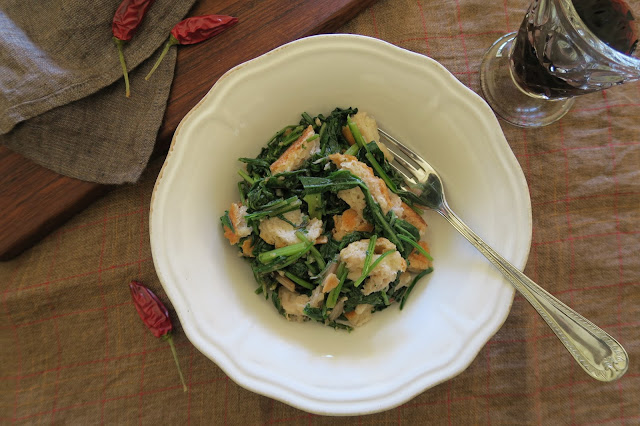 Remove the root and any discoloured leaves and discard. Wash well in cold water and drain.  In a pot of salted water that has been brought to the boil, add the greens and cook for a 5 minutes until tender.  This will also remove some of the bitterness if the leaves are older. Using a slotted spoon, lift the greens out of the water and drain.

You will need a large frying or sauté pan or even a wok will work well.  Peel and crush 2 cloves of garlic with the back of a knife.  Add 4 tablespoons of olive oil and sauté the cloves of garlic ensuring they do not burn while flavouring the oil, add some chilli flakes. Add the chicory that has been chopped in half, 1 cup of water or stock, a pinch of salt, the roughly chopped bread and allow it to cook for 5 minutes but don't overcook the bread. Remove from the heat and allow the bread to soak up all the liquid. The idea is to achieve a moist dish that isn't overcooked like pappa (baby food). Best served hot in a bowl with an extra drizzle of olive oil.  PS: I forgot to add the drizzle of olive oil before I took these photos. :)

Enjoy with a glass of red wine!

Stay tuned for this month’s Cucina Conversations posts on vegetarian and vegan dishes for the lean months of Quaresima (Lent).  I will cook again with cicoria and make my delicious crocchette di patate e cicoria (potato and chicory croquettes)