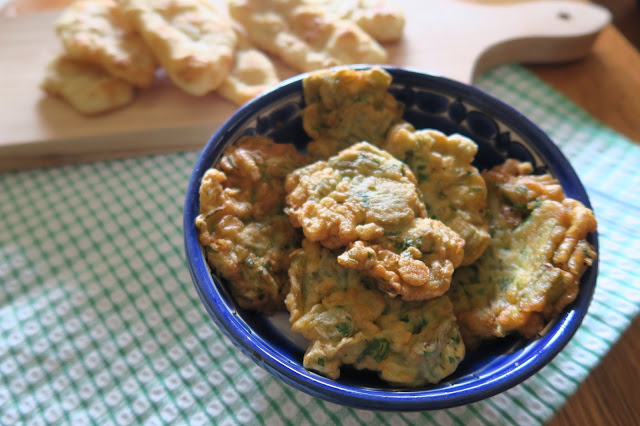 This post has been long overdue, attributed to the fact that this wild green is not easily accessible unless you happen to have some growing nearby along a railway line, on the outskirts of Melbourne’s country roadside or on your farm.  There have been a few sightings and opportunities to gather, however I’ve been very reluctant fearing that this wild green considered by the council as a weed may be sprayed.  What am I referring to you may ask?  Well, many Italians would know this wild plant as cardoni or cardi. This thistle like plant is known by its botanical name as cynara cardunculus or more commonly known as cardoons.  It is related to the globe artichoke and very similar in appearance with the addition of spikes on the end of its leaves. It has a more delicate flavour, a bit like a Jerusalem artichoke.  The Romans used to eat the stalks in salads, and even today many Italians cultivate the stalks of this wild plant and enjoy its slight bitter taste knowing its medicinal value of improving liver and gall bladder functions as well as lowering the levels of blood cholesterol.  Here in the southern hemisphere they are best harvested between June to August as this is when the plant is young and tender. Below you can see photos of the wild variety, that my husband took growing along a country road just outside of Melbourne, and the other taken by Ben on his farm. The last photo is of the artichoke plant whose stalks I cooked with. 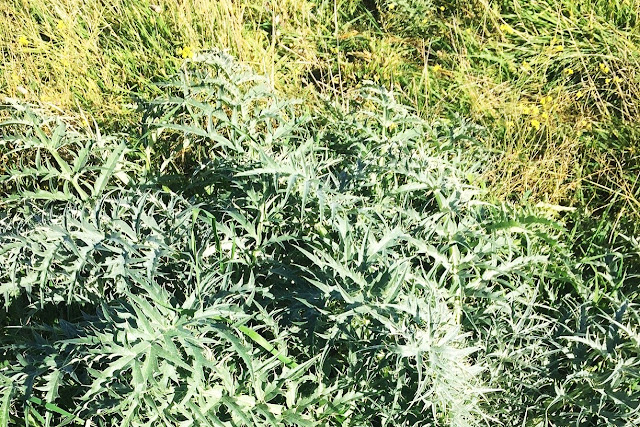 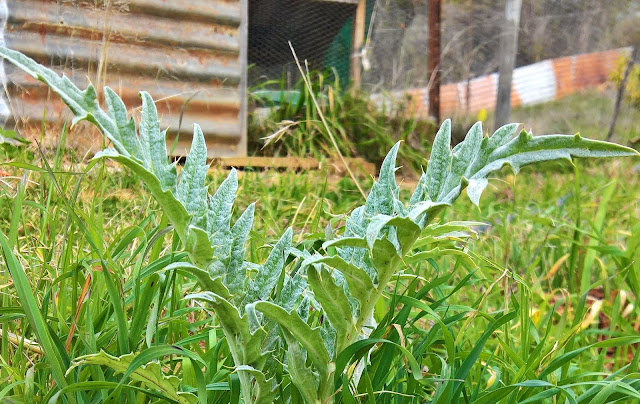 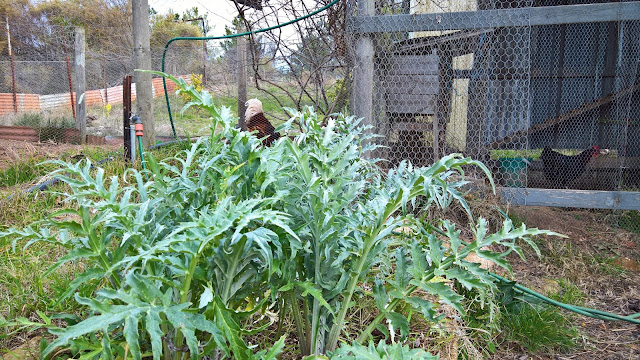 Cardoni were very much enjoyed by my husband’s parents and picked around roadsides.  I was told that they even planted the seeds at the holiday house at Phillip Island, so that they were guaranteed their own harvest.  The stalks are cut off at ground level and trimmed of its leaves. They are then soaked in water mixed with lemon juice.  This prevents them turning brown when exposed to the air. They are then pre-cooked in boiling water for about 20 to 30 minutes until tender before serving them as you would a cooked vegetable or proceeding with  additional steps. My mother in-law would simply prepare them by boiling first until tender, and then dipped in egg, coated with breadcrumbs and parmigiano cheese and shallow fried. Ben who kindly gave me the artichoke stems from his farm as the cardoon plant was too small to harvest, suggested a simpler recipe his mother uses.  After the initial preparation, she would infuse the olive oil by frying a clove of garlic, and then saute` the cardoons with a sprinkling of breadcrumbs to coat.

I chose to cook my few stalks using a recipe adapted from Rosa Mitchell’s Sicilian cookbook My Cousin Rosa Rosa, wanting to make these fritters for some time.  As mentioned, I used the artichoke stems instead and did cut back the quantities the recipe suggested, as I didn’t have the amount of cardoon stems listed.  With barely 8 stems, I endeavoured to include all the ingredients but used my discretion with quantities and as a typical Italian, cooked all’ occhio.  It made a total of 6 fritters which could serve 2 for an entre` or better still 1 (essentially me) for lunch.  I also chose to use plain flour instead of the self-raising, balancing the ratio of batter to vegetable, and therefore they don't puff up as much.  I have included the full recipe that Rosa has provided and note that if you cannot obtain cardoons, the stalks of the artichoke plant I used work just as well. 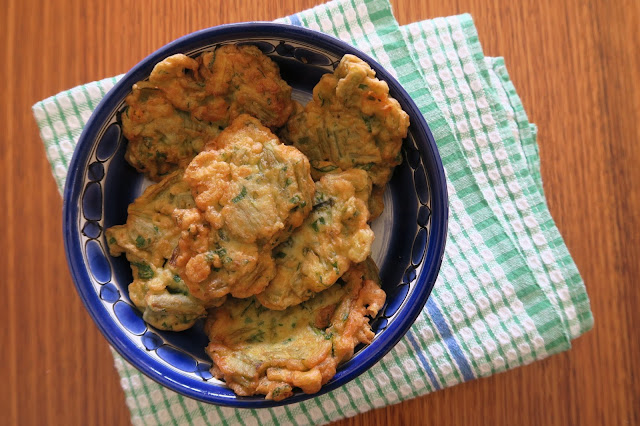 
In preparing the cardoons, with your knife run along the edges of the stems and take off the leaves.  The stems should be tender, so if they are at all fibrous, discard them. Bring a pot of salted water to the boil, add the cardoons and cook until tender – 20 -30 minutes.  Duration of cooking will depend upon their initial tenderness.  You want to be able to push a fork through them easily.  I cooked mine for 20 minutes.  Drain and cool in a bowl.  I further cut them into small pieces once cooked to allow for full coating in batter.  Add the flour, cheese, garlic, parsley and some salt and pepper and mix lightly.  Add the beaten eggs and mix again.  If the mixture appears too dry add a little water to bring it together.


Heat enough oil to cover the base of a frying pan over medium heat.  When hot, add tablespoons of the mixture and cook for about 4 minutes until golden.  Turn over and flatten slightly with a fork.  Cook on the other side until golden and cooked through to the centre.  Serve hot or at room temperature.  Enjoy!