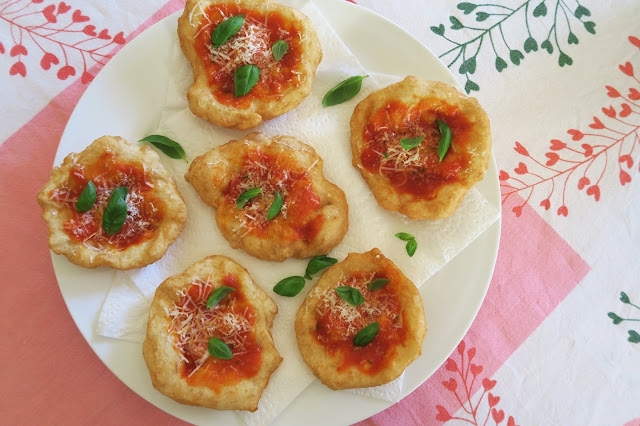 After school snacks for my girls growing up consisted of fruit, a tub of yogurt or crackers with their favourite spread, and occasionally sweet muffins of some sort.  On the occasion that my parents would pick them up from their early school years, they were treated to their favourite pane e olio - fresh crusty bread with a drizzle of olive oil and a sprinkling of salt.  When mamma had the oven going, it was pizza bianca, and if their cousins were also over, she would make what they fondly refer to as nonna’s donuts - fried pizza dough coated in sugar and cinnamon.  This was also my favourite childhood treat along with its savoury counterpart, pizzette montanare.  Now, I have to confess that I have never made these pizzette for my family until now and have been accused of depriving them of the best snack ever.   So this is the recipe I’ll be sharing with you as my contribution to our 12th edition of Cucina Conversations dedicated to 'la merenda'.

Many would share my sentiments that there is nothing more satisfying than fried dough; whether it's sprinkled with sugar in the form of zeppole, filled and turned into calzoncini (dough circles that are folded and sealed to contain a savoury or sweet filling) or topped with a simple sauce and called pizzette montanare. Credit must be given to the Neapolitan's ingenuity for coming up with varied ways of using pizza dough, which dates as far back as the 1800’s.  Pizzaioli (pizza makers) would take leftover dough home to their family to fry and top them with a bit of leftover sugo (sauce) and a grating of hard salty cheese. It was an ingenious way of cooking dough using very hot oil as a heat transfer for those who didn’t have a wood-burning oven at home. Today, montanara forms part of the traditional street food culture in the Campania region of Italy along with other fried pizzas of Naples, better known as pizze fritte.  As the name suggests, they are fried rather than oven baked, rendering them soft on the inside with a thin crisp coating on the outside; light and unbelievably addictive.

Story has it that pizza montanara took its name from the Italian word montagna – mountain, and considered a Neapolitan symbol of one of the most famous volcanoes in the world - Mount Vesuvius.  The parallel lies in the formation of craters and peaks when the flattened pizza dough swells while dipped into boiling oil.  When fried, it takes on the golden colour of the sunlit slopes of Mount Vesuvius which once caused Pompeii‘s destruction during the eruption in 79 A.D. The hot red tomato sauce spooned on top is said to represent the lava descending from its peak; the grated cheese like the white ash falling during its volcanic eruptions; and finally the green leaf of fresh basil symbolizing the fertility of volcanic soil.  From this analogy we can see not only the ingredients used but also their placement in the formation of this iconic pizza.

The dough mixed for these pizzette is very different to that of pizza.  It has a high hydration and therefore more like a focaccia base that is soft, light and airy, allowing it to swell and bubble when fried.  The soft dough is gently stretched and formed into shape using your hands rather than flattened with a rolling pin.   As you form each round, they are fried in hot oil until lightly golden on both sides, preferably in light and not so rich oil such as canola or vegetable oil.  Traditionally they are fried to a light golden colour as they would further brown in the oven later on once the toppings have been added; however as the sauce topping is customarily already cooked this step can be omitted. The traditional cooked sauce used on these pizzette is the marinara.

Although we have grown accustomed to the creative freedom in choice of what we add on top of our pizza, purists consider there to be only two true pizza toppings — the marinara and the margherita. The marinara being the older of the two is known to have a topping of crushed tinned tomatoes, garlic, oregano and extra virgin olive oil, while the margherita, said to be invented in 1889 in honour of Queen Margherita of Savoy, is graced by puréed tomato, slices of mozzarella cheese, and fresh basil.

There is another notable difference with these pizzette; while a traditional pizza uses puréed raw tomato, the former mentioned is made with cooked traditional marinara sauce. Its name (literal translation of mariner), is believed to have derived from the food prepared by the mariner’s wife for her seafaring husband when he returned from fishing trips in the Bay of Naples. When exactly did this name come in use remains obscure, however what can be said for sure is that an Italian-style marinara sauce has rather less than more ingredients and known to be a great base sauce for other popular dishes cooked over time.

These little Neapolitan style pizzas are best served while hot but also delicious at room temperature. Apart from being a great snack, fried pizzette make wonderful finger food to accompany an aperitivo.  And with summer just around the corner, it is one way of enjoying a home made pizza without having to turn on a hot oven. 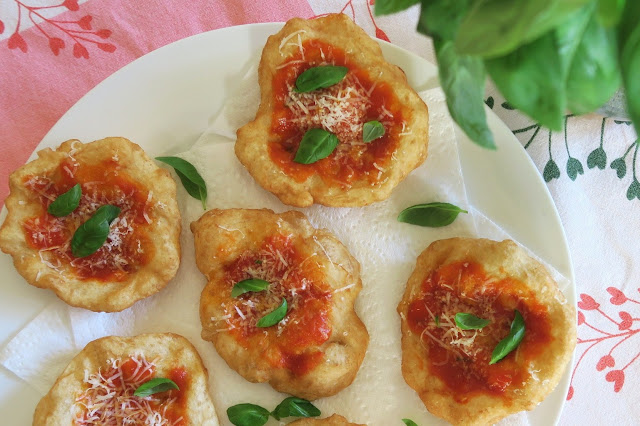 For Shallow or Deep Frying
canola or vegetable oil

Montanara Sauce
Heat the oil in a saucepan over medium heat. Add the tomatoes, the sliced garlic clove, oregano and stir well. Bring to the boil and simmer on a low heat  for 30 minutes until fragrant. Season the sauce to taste and remove the garlic before serving.

Pizzette Dough
To prepare the dough, place the flour into a large mixing bowl along with the salt, making a well in the centre. In a cup add the yeast, sugar and tepid water and allow it to activate after stirring.  Add the activated yeast into the centre of the well. Use your hands to mix the flour in large circular motions.  The dough mixture is generally a little stickier than traditional pizza dough, so if the dough appears too dry then add more tepid water. This process can be done using a stand mixer, however hand mixing allows one to most easily and accurately gauge when dough has reached what Italians call 'il punto di pasta' - the perfect texture and consistency for pizza dough. Once reached, then a stretching and folding motion is used to create a light and airy dough, so using lightly oiled hands will assist with this process.  Cover the bowl with plastic wrap and place in a warm draft-free space to rest for 1 hour or until it has doubled in size.  The dough will appear light and full of air bubbles.

Heat the oil in a deep frying pan until very hot. Use oiled hands to break off small portions the size of a mandarin and stretch into small flat circles. Carefully place the portion in the hot oil and cook until golden in colour, rotating frequently with a fork to cook both sides evenly. Repeat the process, and once each pizzetta is fried, they are placed on some paper towels to drain. Top with hot marinara sauce, add a grating of parmigiano or pecorino cheese and garnish with some fresh basil leaves. Enjoy! 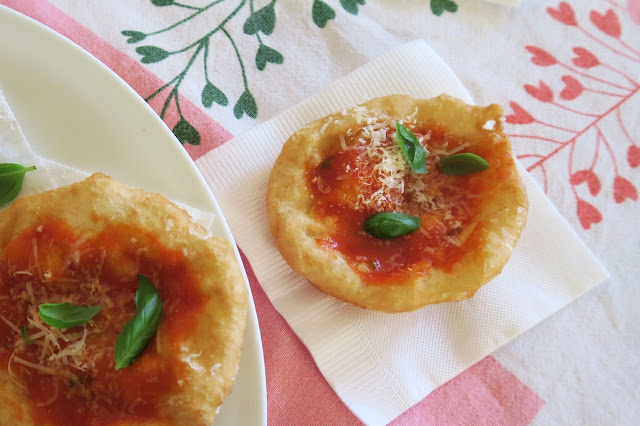 Here we are, exactly one year on since our inaugural Cucina Conversations posts went live.  It has been a fun year consisting of monthly researching, cooking and writing dedicated to recipes and related stories; Each told by seven food bloggers with different perspectives but sharing the same passion for Italian cuisine. Join our celebrations and continue to follow our journey into the subsequent year with more exciting topics and recipes scheduled.  So now, whether it's a snack for after school or for all who need something to tie them over until their next meal, here are the rest of the recipes shared: