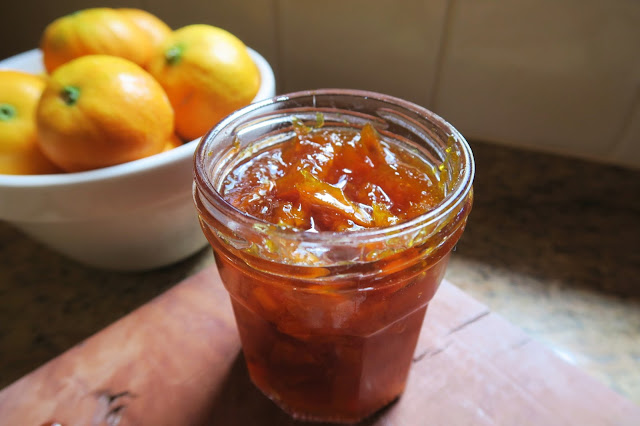 A citrus fruit salad tree growing two varieties of lemons - meyer and eureka; juicy navel oranges and nova mandarins all on the one tree. It's quite a treat to own such a tree and many childhood sunny days were spent beneath its shady canopy smelling the sweet scented blossoms and enjoying its fruits. Papa` grafted this tree over 30 years ago and not only is it spectacular in full bloom, it is also lovely knowing we have an endless supply of various citruses ripening over the winter period.  But it’s the additional younger mandarin tree planted beside it that has been the last of the fruit trees for the season to bestow its harvest well into spring. 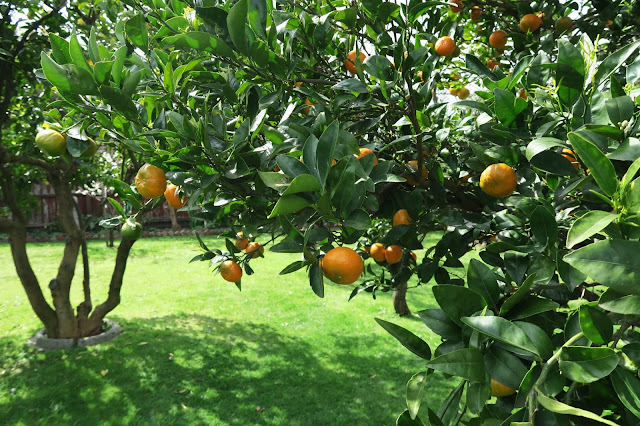 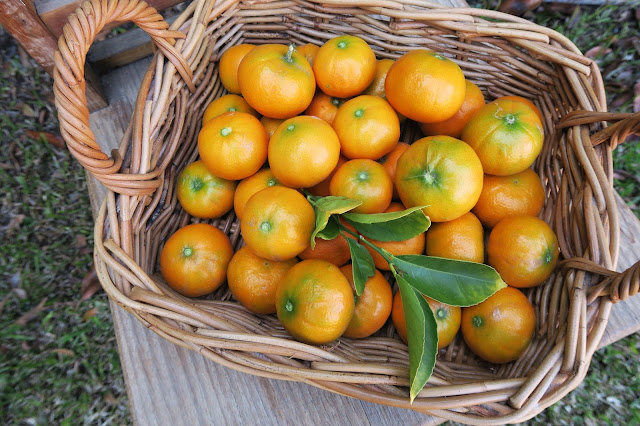 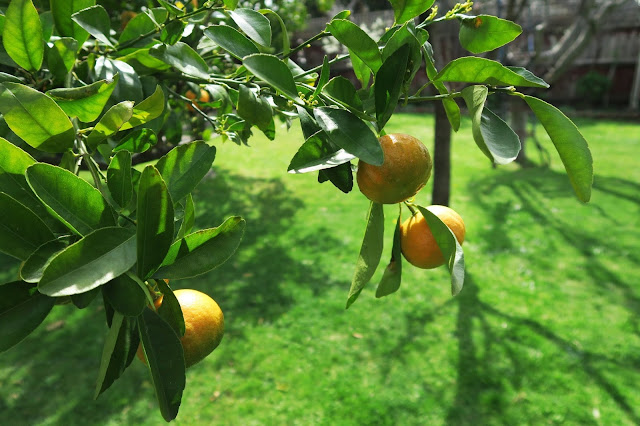 The generous citrus yield this year has been literally hanging on, waiting patiently for my spare time to tend to its preservation.  I've made jam, marmalade as well as candied thin slices so I can use them in my upcoming Christmas sweets. Nothing goes to waste; even the thin organic skin of the mandarins have been sliced finely and frozen for future biscuit baking. However the trees have continued bearing more than we can possibly consume, much of the fruit has been given away and up until last week mamma was still delivering bags filled with juicy sweet mandarins to the neighbours.  Hesitantly I even found myself rejecting a third full basket over making yet another batch of marmalade; my only explanation is that lately I have been quite time poor.

This month our Cucina Conversations topic is about preserving, whether it is the seasons harvest or extending the life of food for that little bit longer. Preserving is the ultimate expression of seasonal eating because the whole point is to use fresh ingredients at their peak; and when food is enjoyed within its natural season, it will have the most complex of flavours and the best nutrition.  My fellow Cucina Conversations bloggers have been preparing some treats for this edition of our round-table. Marialuisa at Marmellata di Cipolle has shared a recipe for pomodori secchi sott'olio - sun dried tomatoes in oil, while Flavia at Flavia's Flavors has shared a recipe for pesto abruzzese. Daniela at La Dani Gourmet has used marroni - marron chestnuts to create a chestnut spread to celebrate autumn, and Rosemarie at Turin Mamma will make fette biscottate - dried slices of pan brioche making the perfect base to spread lavish amounts of her home made apple paste.  I have decided to share my recipe for marmellata di mandarini - mandarin marmalade.


Marmalade, which is traditionally made from bitter Seville oranges is the most famous, but can also be made from lemons, limes, kumquats and other citrus.  To make citrus marmalade, the fruit is cut a certain way to expose as much of the rind as possible, releasing the maximum amount of pectin to help create a set.  This also gives the marmalade its distinctive bitter taste.  Not many have a liking for citrus marmalade but I quite like its bitter flavour, especially when paired with chocolate.

This year for the first time I decided to experiment with the addition of vin cotto to the citrus fruit, suggested to me by my IG friend Marissa at Maccora Vinocotto. She kindly sent me a few bottles of her vin cotto when she heard that my reserves had totally diminished.  Vin cotto is a syrup that my family also make every wine season during the autumn period and a product that my paternal grandparents made and used in their cooking.  The beauty of preservation experienced then and now, is that when the season is long gone all still enjoy that bottle of vine-ripened flavor whether in the form of wine drunk with a meal or vin cotto used in cooking.

This marmalade recipe is easy to follow and make.  If you have access to vin cotto then I encourage its use as it adds an exquisite caramelised flavour to the fruit. However it also works well without it, and can be replaced with either grated ginger or even vanilla bean. I like to experiment every time I make a new batch.  If you have the correct ratio of sugar to fruit, then adding your favourite flavouring does not affect the consistency of the marmalade, however I have discovered that there are some rules when pairing.

The mandarin variety recommended, such as the nova used here, or even the honey murcott that you can still find at the markets in early spring, have a thin skin, are firm and super juicy.  The latter are sweeter and may require the addition of one lemon, while the nova is more tangy and I have therefore opted to leave out the lemon and added the vin cotto. Yes, both varieties may contain pips, but take no time to remove when the fruit is sliced.  These pips are essential and used for the pectin that is released to help set the marmalade. 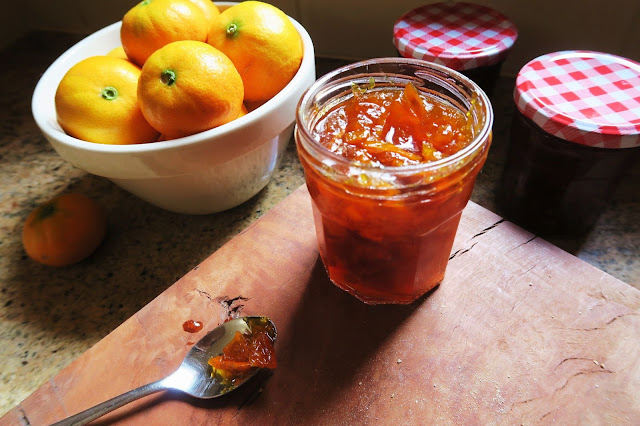 Marmellata di Mandarini (Mandarin Marmalade)
This makes a relatively small batch that you will find easy to handle. If you love marmalade like me, just make several small batches and experiment with the additional flavours.
Makes 3 x 500 g jars

It's important to use well cleaned and sterilized jars when storing preserved food.  I thoroughly wash, rinse and then place my jars and lids in a saucepan filled with water, ensuring the jars are submerged and bring them to the boil. Continue boiling for 10 minutes and keep in hot water until ready to use.  Drain thoroughly and allow drying.  Alternatively you can place your clean jars with their lids upturned in a 110◦ C oven to sterilise them for about 30 minutes, then turn the oven off and allow them to sit there until you are ready to fill them.  Also place a plate in the fridge for testing the set of the marmalade.

Wash mandarins before cutting them.  Cut the fruit in half through the centre vertically, remove any pips and place them in the muslin square, tie securely and set aside. Continue to slice the fruit 2 mm in thickness so you end up with half-moon slices.  Place the cut fruit in a medium sized saucepan, along with 1 litre of water and the muslin bag containing the pips – this can be tied to the pan handle with a piece of kitchen string.

Heat the mixture and add the sugar, stirring until it is fully dissolved. Then stir the mixture every 15 minutes and allow it to boil until it reduces substantially and the syrup thickens. Test the marmalade for a set by placing a teaspoon full of it on the cold plate that you have removed from the fridge. The marmalade will be set when it does not appear runny when cooled.  If the marmalade is not yet set, allow it to cook a further 10 minutes.  When the marmalade is ready, remove from the heat and stir in the vin cotto.

Pour the marmalade in the previously sterilised jars leaving a small gap of about 5mm from the top. Seal the jars with the sterilised lids while the marmalade is still hot.  This will cause a suction as the contents cool down and form a seal allowing you to keep the marmalade for up to a year or more.

Enjoy the marmalade on some crusty fresh bread or use it as a filling for this Ricotta & Mandarin Tart I baked a few weeks back. 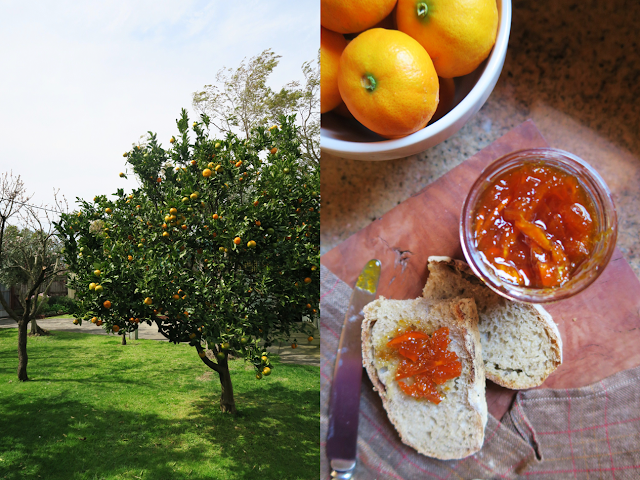 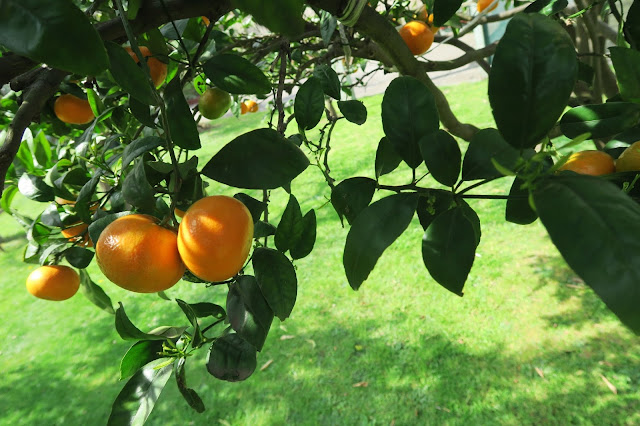