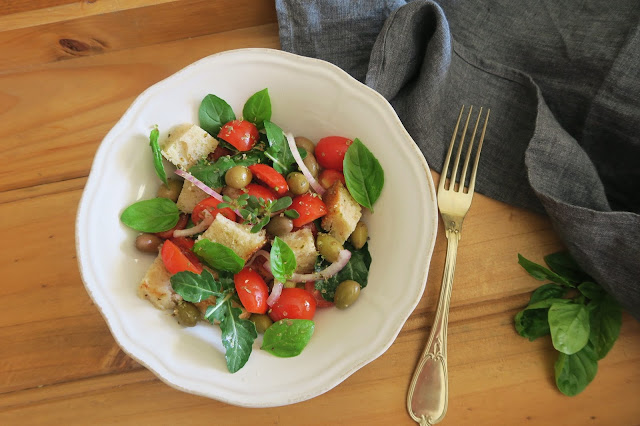 Take a frugal idea of mixing stale bread with chopped up tomatoes to make a salad and with a few subtle changes in ingredients or technique, what is essentially the same type of dish takes on a different name in its respective region in Italy. The world-famous panzanella from Tuscany and the caponata napoletana from the Campania region are two examples; but have you heard of la cialledda, (not to be confused with the hot winter dish of the same name). This is another bread and tomato salad in essence, though this time from the regions of Puglia and Basilicata in the deep south of Italy.


This month’s Cucina Conversations edition is all about salads, and for me salads are enjoyed all year round prepared as my lunch for work or part of our family meals.  Most seasonal vegetables or fruits can be served as a warm or cold salad and I love getting creative with whatever is in season at the time. I recently made this refreshing persimmon, fennel & pomegranate salad, one I'll be serving more often while my parents persimmon tree keeps giving generously this autumn. But with a late end to summer here in Australia, I chose to use our flavoursome tomatoes and the abundance of basil and rocket I had planted and will be sharing this simple summer salad - la cialledda that my maternal grandfather loved so much.

Of all these bread and tomato salads mentioned, la cialledda is the least elaborate, the most carefree in preparation, but equally delicious. It is the kind of rustic meal that speaks of my grandparents and their frugal way of feeding a family of five girls during a period of time when one made do with whatever ingredients they could come by. In fact this salad has been adapted over time; remembering my nonno Rocco loving one particular ingredient which was originally chosen more so as a substitute for the lack of fresh herbs – the purslane.  For those who are not familiar with this edible weed, its leaves have a cucumber-crispness and lemony tang with a slight peppery kick, which made the perfect backup for rocket and basil. You will probably find it in your garden amongst your vegetables or flowers, so have a little wander.

Emiko Davies in both her book Florentine and her blog, recounts and shares a recipe for the Bronzino Panzanella, named after the 16th Century Florentine Renaissance painter, Bronzino, who immortalised a recipe that resembles in all ways today’s panzanella, minus the fresh tomato.  In his poem, we see the wild porchellanetta (purslane) listed as one of the ingredients.  I’m certain that my grandparents prepared their cialledda in a similar manner, and only when tomatoes came into season, did they add them to this salad.

The essence of the three salads is the use of bread. In the panzanella, we see a salt less Tuscan bread referred to as il pane sciocco - senza sale, with crust removed, soaked and then shredded before mixing it with the tomatoes, cucumber, red onion including a bit of vinegar. The caponata napoletana, on the other hand uses a kind of hard biscuit known as la frisella which is topped with a tomato salad, often enriched with savouries like olives and anchovies and some mozzarella cheese. The cialedda salad uses the rustic Matera bread made from semolina grain that is cut into chunks and moistened a little with simple, vinegar less tomato salad.

The cialledda would be the simplest and poorest of ingredients of the three. It truly represents its region and the notion of ‘cucina povera’ -  a reality reflected in the simple local cuisine of the once poor.  The addition of dried origano, which was never lacking as there was always a hanging bouquet in my nonna’s kitchen and half a finely cut red onion completed this dish. However, if the situation allowed it, and other seasonal ingredients were available, they could also aspire to the rich version to include tomatoes and a hand full of those bitter olives known as tarantine. The dish was finished by adding a few leaves of basil or purslane to make this a true cialledda the way my nonno Rocco enjoyed it. 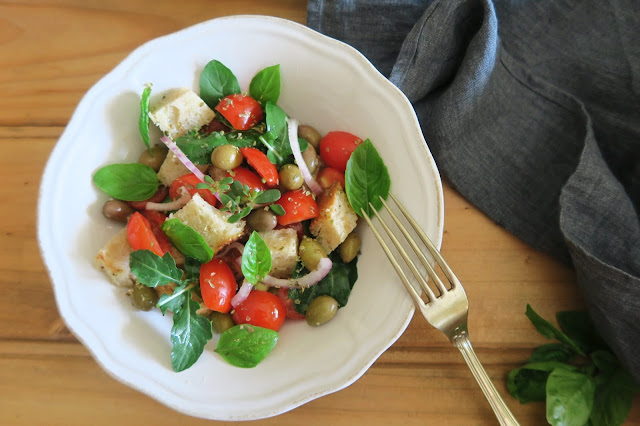 This salad doesn’t really call for a recipe per say, but I have included the quantities as a guide knowing that you can increase or decrease depending on your taste and how many you are feeding. Like most salads, it is best to prepare this dish closer to the time of serving, but allow enough time (up to half an hour) for the flavours to permeate.
This recipe serves 4.

This recipe calls for stale or day old bread which allows the juices to soak through but not render it soggy.  It is therefore important to use a country style loaf or sourdough with a hard crust.  Cut the stale bread into irregular pieces in a bowl and lightly sprinkle some cold water using your hands without soaking the bread too much. Set aside and allow the bread to moisten.

Finely slice half a red onion. If like me you have an intolerance to onion, but like the flavour, you can reduce its potency by soaking it in some vinegar and water while you put together the rest of the salad.

Wash the tomatoes and cut them into wedges removing any seeds. Place in a bowl and season with salt and a little oil. Squeeze excess liquid from the onion and add to the tomato and mix through.

Place the bread in a large slightly deep serving dish. Season the bread with a drizzle of oil and some salt, add the tomatoes stirring through gently so as not to break the bread excessively as it is soft.

Sprinkle generously with the oregano and let stand for no longer than half an hour, after which time you can eat this basic version of cialledda. And if you have some purslane growing in your garden, add that in as well! For a richer version of this salad, add the olives, rocket and basil like I have.