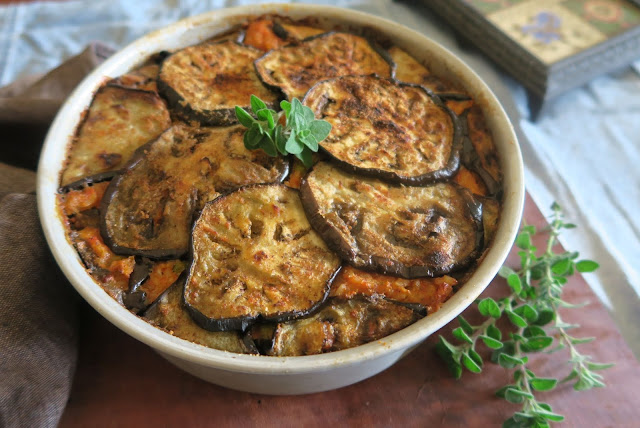 We are back! You may have noticed that our Cucina Conversations monthly posts missed a few months and that is because we have decided to now post quarterly to fit into our busy lives. This month is all about 'stuffed foods' and for me this means finally posting the recipe for the baked rice timballo encased with crispy golden melanzane (eggplants) I had promised to share a while back.  Truth be told, I had made and photographed this dish for our May edition but couldn't find the time to write about it. Many events got in the way and soon found myself in Italy, and no sooner back in the swing of work. So after a few quiet months, here she is.

Those who are not familiar with the term timballo or sometimes called timpano, it refers to an elaborate dish typically layered with cooked pasta or rice, and often enriched with additional ingredients. It can be encased in many ways such as a golden crust of pasta, pastry sheets or even vegetable slices and then baked in a deep form.  The name derives from an ancient percussion instrument, the drum or tympanum, so by analogy, a cylindrical mould.

Legend has it that this dish is the result of a marriage between Leonor of Aragon, daughter of Ferdinand I of Naples, and Ercole I d'Este in 1473, a Union which gave rise to cultural exchanges between the two Lordships. That would explain the inclusion in the recipe (which was very in vogue in the Ducal courts) of macaroni pasta which spread to the South.  Pellegrino Artusi, in his classic Science in the Kitchen and the Art of Eating Well also claims that the cooks of Romagna in north-central Italy were generally skilled at making this complicated dish and lists a recipe for pasticcio di maccheroni (pasta and meat timbale), noting that pasticcio can sometimes be used as a synonym for timbale.

If you are out to impress, you can recreate the ever so extravagant and monumental timpani fit for those special occasions. You may choose from the golden-crusted timpano with which the immigrant-restaurateur brothers Primo and Secondo dazzled their banquet guests in the 1996 movie Big Night,  or the opulent Sicilian timballo that is described below in the famous Italian novel Il Gattopardo (The Leopard), set in 1860 during the unification of Italy:

“...the aspect of those monumental dishes of macaroni was worthy of the quivers of admiration they evoked. The burnished gold of the crusts, the fragrance of the sugar and cinnamon they exuded, were but preludes to the delights released from the interior when the knife broke the crust...first came a spice laden haze, then chicken livers, hard boiled eggs, sliced ham, chicken and truffles in masses of piping hot, glistening macaroni to which the meat juices gave an exquisite hue of suede." (from the chapter: Donnafugata - The Leopard, Giuseppe Tomasi di Lampedusa).

In making this dish the variations are endless and by no means limited to those special occasions. This relatively modest recipe by Rachel Roddy published in The Guardian, features a tomato risotto layered with mushrooms and cheese. But you could just as easily flavour the rice with saffron, or swap mushrooms for spinach, or add peas as I have. You can up the ante with a savoury mix of sausage, onions and pancetta as a filling too. It all depends on what you are hungry for and have in your pantry or fridge. The goal though is to create a crust that, after it is baked and un-moulded, will hold up to being sliced into hot, cheesy wedges.

A couple of tips: Be sure to grease the baking dish with butter and then dust it with fine breadcrumbs to allow for an easy release; And ensure the timballo sits for 10 minutes before turning it out onto a plate, or you could end up with a messy glop…and deflated ego. Don't worry if you don't have a timbale pan. The recipe also works with a well-greased cake tin, a spring-form pan, or a Bundt pan. You can serve this dish as a main or as part of a buffet. Whichever way you make or serve, it slices beautifully like a cake. It is really hearty and makes for great comfort food.

As Rachel beautifully writes in her introduction to this recipe: “The triumph of unmoulding a rich, plump drum of timballo is one of life’s simple pleasures, rivalled only by the act of slicing into the layers of melting cheese and rice, bound by their crunchy aubergine and breadcrumb crust.” 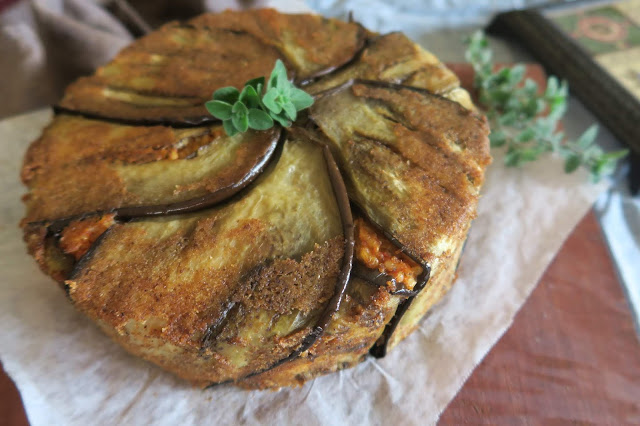 Soak the mushrooms in 500ml of barely warm water for 20 minutes. In a large, deep frying pan, fry the onion in the olive oil until soft.

Lift the mushrooms from the liquid and add to the pan, along with the cooked onion, tomatoes, concentrate, peas and basil. Cook at a steady simmer for 25 minutes.

Meanwhile, cook the rice in salted, boiling water until tender but al dente. Drain and add to the tomato sauce and cook for another few minutes. Season to taste.

Cut one eggplant into 3mm thick slices lengthways and the other into 3mm circles.  To cook the eggplants, either rub with oil and bake at 180C/350F until tender, or griddle or shallow-fry in oil until lightly coloured, then blot on kitchen paper.

Chop the cheese into small cubes. Butter a cake tin and coat with breadcrumbs, then use the long slices of eggplant to line the tin ensuring a slight overlap.

Add the parmesan cheese, beaten egg and cubed cheese to the rice and mix well.  Add the rice mixture into the tin, pressing down firmly. Finish with some extra grated cheese and then layer the circular cut eggplants on top to encase the timballo. Press down firmly with hand.

Bake at 180C/350F for 25 minutes. Allow to cool for 10 minutes, run a knife around the edge of the tin, loosen and then invert the timballo onto a plate.

I hope you will make this dish or version of and promise it will please and dazzle your guests too. If you do so, post it on Instagram and let me know. I will showcase it on my Insta stories with love. 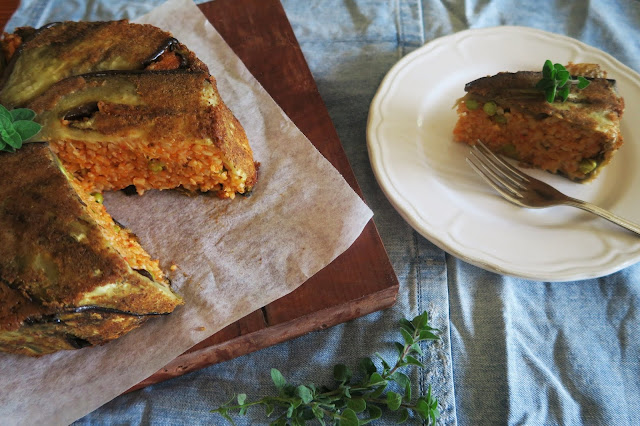 Other recipes for this months Cucina Conversations include: