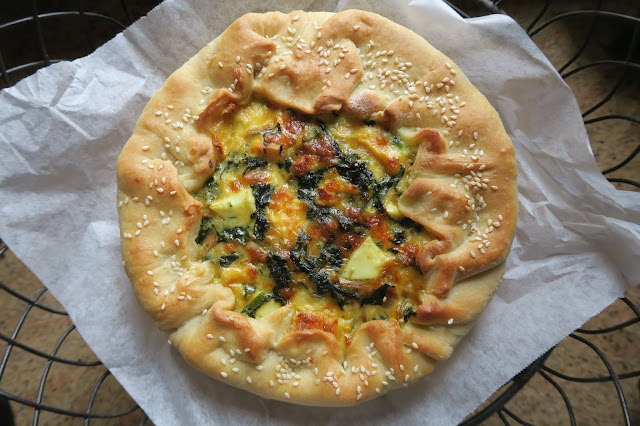 Torta rustica, whose name derives from the tortiera or cake tin in which it is baked in, literally means 'rustic pie’ in Italian.  Rustica, because of the myriad of ways it can be easily filled. The choice of filling is based on preference and what you have in your fridge.  It can be filled with sausage, tomatoes and cheese like a pizza, or with eggs, cheese, cured meats and vegetables as this one. This versatile torta rustica is both a seasonal staple and perfect make ahead dish that can in fact act as an appetizer or feature as the main dish.  The outer olive oil pastry makes it the perfect casing for a portable picnic lunch. With boundless recipes and fillings, this savory rustic pie was initially intended as a thrifty way to clean out our fridges by adding bits of leftover vegetables to a mix of cheese, cured meats and an egg or two to bind it all together in a pastry shell.

With an abundance of bietola (chard) growing in my parent’s garden, and nearing the end of season before it begins to go to seed, we have been slowly pulling the plants out and cooking many dishes with it.  A fair amount of it has gone into pies and soups, pasta dishes or simply sautéed and served alongside meats. Naturally this pie holds a fair amount of chard, but you can substitute it with any other leafy greens in season.

The crust of choice can be puff pastry, but I’ve found it to be too soggy for a leafy green filling like this one. My preferred crust is my olive oil pastry that never lets me down.  I use it more frequently than a pizza dough especially when I am time poor or need quick results. 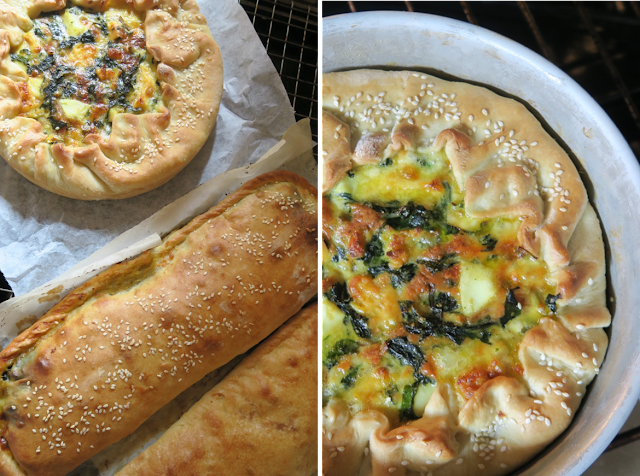 Torta Rustica (Rustic Savoury Pie)
This pie uses a 22 cm cake tin. You can fully cover the top of the pie or create a lattice effect or leave it partially open as I have. In this case any left over pastry can be used to fill small half-moon pasties with filling of choice.

Sift the flour and salt into a large mixing bowl and create a well.  Add the oil and water to the flour.  With a fork stir the flour into the wet ingredients until all combined. Now use your hands and knead until the pastry comes together.  Use spoonful of water if the mixture is still too crumbly. Work the dough into a ball, cover with a bowl and allow to rest for at least 30 minutes while you prep the other ingredients.

In the meantime, prep the filling.

Heat 5 tablespoons of olive oil in a large pan with the minced garlic and finely sliced spring onion. Don’t let the garlic burn nor the oil smoke. Add the rinsed (but not completely drained) chopped chard or spinach to the pan and saute until wilted and most of the liquid has evaporated. Season to taste and allow to cool completely before assembling the rest of the pie.

On a floured surface roll out the dough thinly (2 mm thick) ensuring that the disc is larger in size than the tin to allow overhang.  Carefully place the dough disc into the tin and allow the dough to overhang and set aside.

In a large mixing bowl add the cooled sautéed greens, diced cheese, cured meat and combine with the beaten eggs. Mix well and pour in the prepared uncooked pie crust.

Simply fold over the overhanging dough or if you prefer, blanket a second disc of rolled out dough on top, or lay/intertwine strips of dough.  Brush the dough surface with a little milk and sprinkle some sesame seeds.

Bake in a hot fan forced oven for approximately 25-30 minutes, or until golden.
Allow the torta rustica to cool slightly before inverting or slicing.  Serve warm or cold with a glass or two of wine. 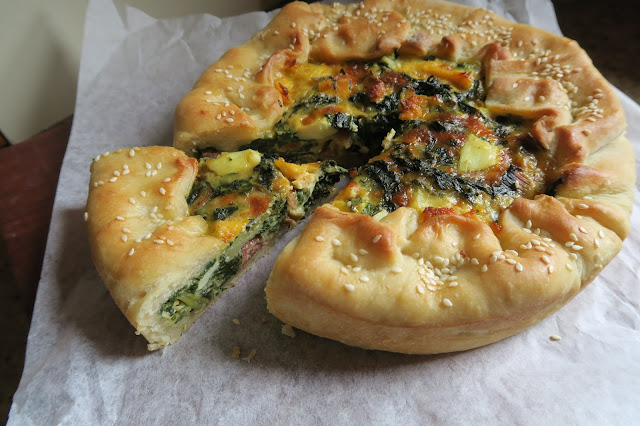