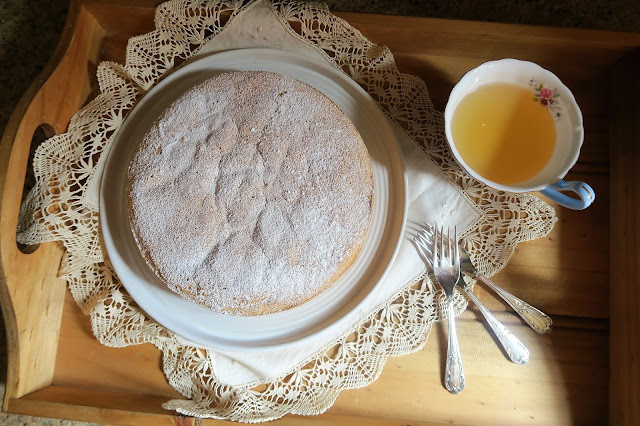 I must admit, I was late in the game with discovering Pellegrino Artusi’s book or owning my own copy of Science in the Kitchen and the Art of Eating Well (originally published in 1891). Unbeknownst to me, it was mamma’s go-to cookbook in the years before we migrated to Australia.  This was a book papa` had resurrected from a pile of old discarded editions that the local library was giving away.  At the time he was working there as a painter and decorator and was given first choice to the books; this one just happened to catch his eye. It now sits in my kitchen and has become my most referred cookbook.

This copy whose spine is held together by tape is one of the oldest cookbooks I own; it was given to me by mamma four years ago.  As it is quite fragile, it sits between newer cookbooks that have been collected over the years.  But whenever mamma comes over, it is this one she pulls out glancing through the pages and reminiscing of her own food memories, musing over Artusi’s little stories that precede the recipes.

Reading through this book, I also recall the dishes mamma prepared for us; my morning zabaione with added marsala; papa`s favourite tortelli di ceci and his morning biscotti della salute to name only a few.  There is a cake recipe that mamma baked for us using fecola di patate - potato starch.  I remember it being a very light, melt in my mouth cake that I could not stop at one slice.  Now-a-days it would be considered the perfect gluten and dairy free sponge cake.  It is lovely just the way Artusi presents it, but  one that he encourages you to modify to suit your taste.

In the introduction to his recipe, the author recounts how he had made this cake for his friend and according to him, later perfected the recipe.  Mamma recalls sharing this cake recipe with her friend, a so-called signora Margherita.  She was my aunts neighbour who lived down our street in Brunswick back in the late 1970’s and would often invite us over for an afternoon tea.  She loved to talk about food and recipes and prided herself as a baker.

This classic light and fluffy cake named after the white petals of a daisy, and made with minimal ingredients – eggs, sugar, potato starch and a grating of lemon for flavour, took on somewhat of a transformation in the kitchen of Margherita. She never really revealed her secret but tantalised us with its grace every time she hosted an afternoon tea and it became her signature sweet, one that I  always looked forward to. I still remember the aromas wafting through her front door as she welcomed us in. Cinnamon and vanilla are what I now recall. Unlike mamma's cake, hers stood tall on its stand and left a lasting impression.

We will never truly know whether la signora Margherita based her cake on Artusi’s original recipe mamma had shared with her (even though she claimed she did) or that of another, but whenever we come across his recipe, we recall Margherita’s spontaneous way of taking this cake and with a few little twists made it her own. 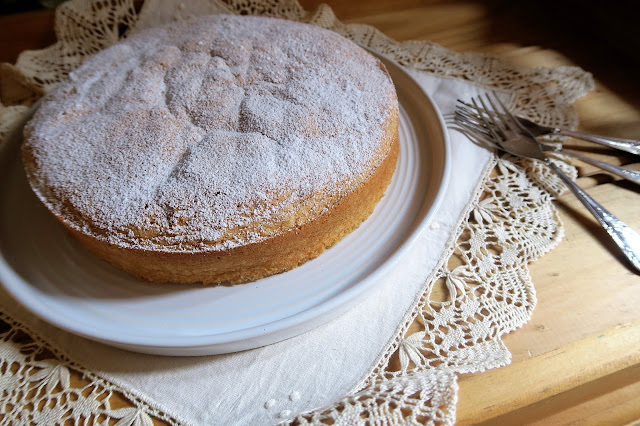 I have made the original version of this cake and loved it for its simplicity and makes a great alternative to the other sponge cake - pan di spagna.  Unlike la signora Margherita's cake which stood tall, this one bakes 3cm high as there is no raising agent added (which stands to reason that she would have secretly added it to her cake). I have replaced the lemon with  the cinnamon and vanilla trying to replicate the one I enjoyed at her afternoon tea.

Separate the egg yolks from the whites and beat the yolks together with the sugar until very pale and creamy using an electric mixer. Add the vanilla extract and continue to beat.

Sift the potato starch and cinnamon together and add to the egg mixture.  Beat until combined.

In a separate clean bowl whisk the egg whites until stiff peaks form, then delicately fold the whites through the batter.

Pour the batter into a 22 cm round cake tin that has been buttered and lined with baking paper.

Bake the cake for about 30 minutes or until golden on top and firm to the touch. When done, let it cool slightly in the tin before turning out. Stand on a rack to cool completely. 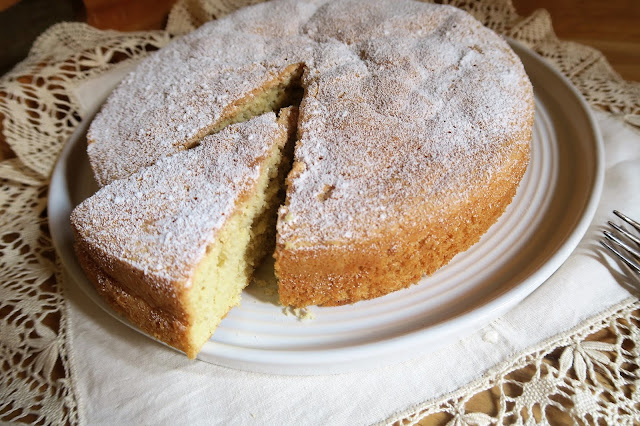