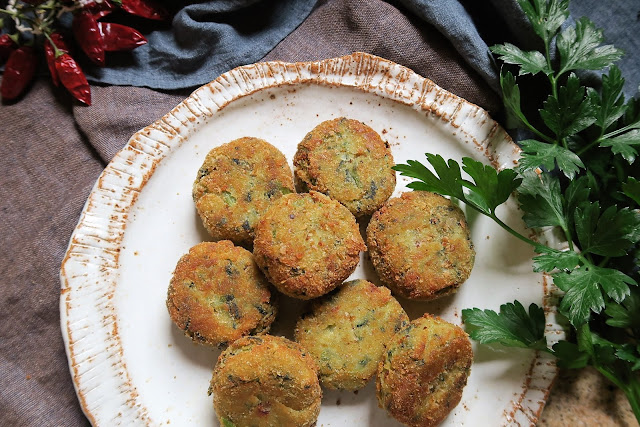 Our visit to the Basilicata region of Italy was just as important for my parents as it was for my family and I. Hearing papa` say "non voglio dimenticare" (I don’t want to forget), brought forward the sad realisation that with age this is most often inevitable. I am thankful though that at 88 years of age he still remembers a lot.

I grew up hearing many stories told by him of his childhood in Acerenza, where my paternal grandparents raised a family of 8 children, worked the land and ran a general store.  They then moved to the nearby larger capital city - Potenza where papa` and his siblings began their own lives and settled.  Papa` and his eldest brother later moved up to the north in Domodossola, my birth town for work reasons where commuting to and from Germany and Switzerland became necessary to support his young family.  The desire to migrate to a faraway country that promised a better future is what we now call home.

As a teenager hearing these recounts didn’t mean so much to me, perhaps because my focus was on the present as it generally is at that stage in life; until now. That sense of knowing one’s roots and following the paths of those that provided us with a better future has enthralled me.

I previously wrote about Acerenza, a quiet town on a hill top in the province of Potenza, but through papa`s memories, as well as the eyes of my cousins’ photos. Papa`s youngest brother had also traced the Mazzaro family tree and from this I was able to learn more about my paternal family history which intrigued me so. I also travelled back to this region but again at an age when visiting an old town to buy local wine and spend the rest of the day talking to paesani (town folk) was not considered contemporary, by me.  In fact it never made it in my collection of so called ‘touristy’ photos; I wish I had paid more attention.

Now a different story; it was time to return not only to his birth town but the land that like many Lucani (as the people of Basilicata are also called), my grandparents worked; the home and business they up kept and trace their story to their final resting place at the foot of Acerenza. 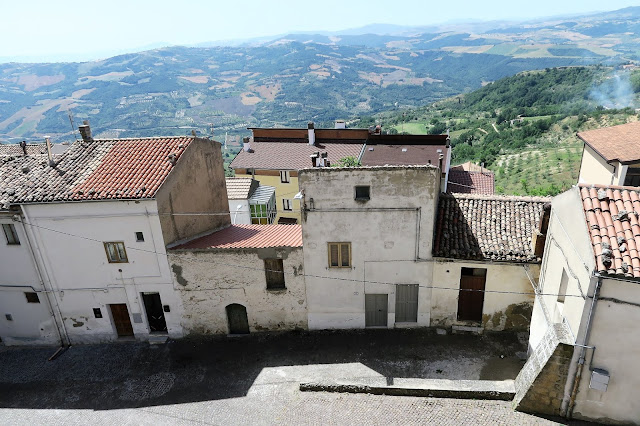 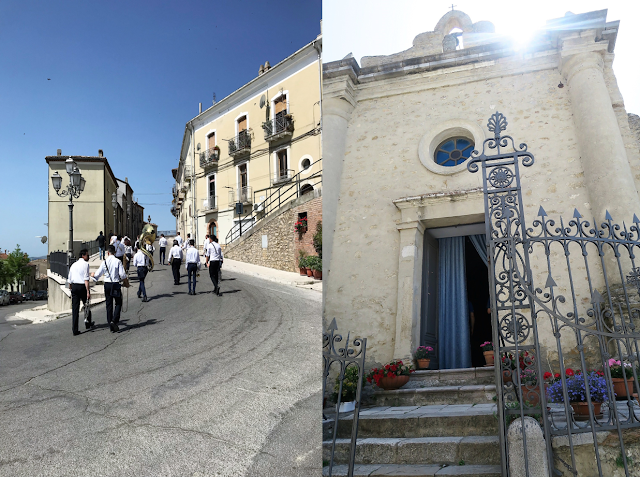 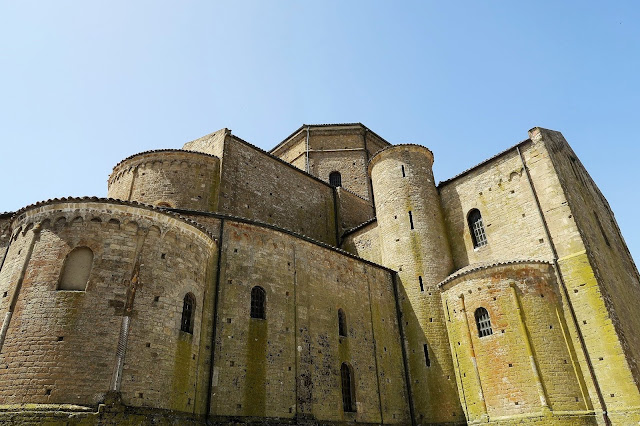 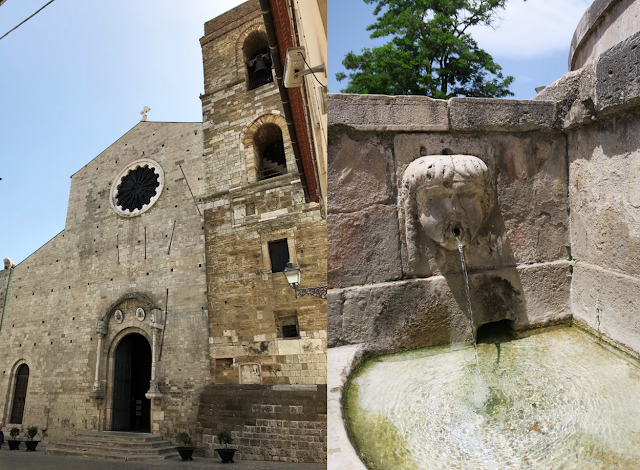 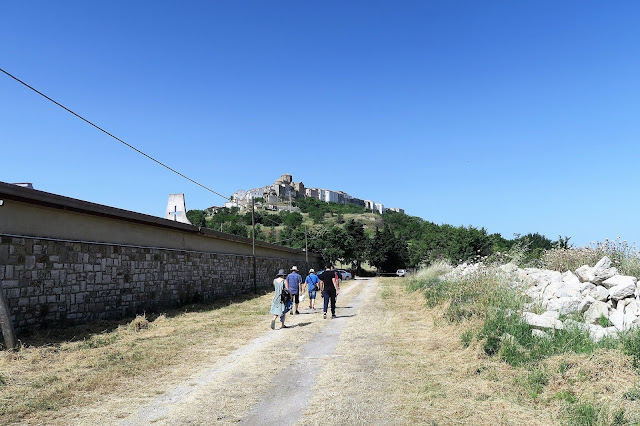 I am totally grateful that my immediate and extended family took this journey with me. My cousins were able to fill in some untold stories and subsequently I was able to take these recollections and images back home to Australia, which became trigger points for more memories and stories told by papa`.

This region of southern Italy with its dramatic landscape encompasses two short stretches of coastline along the Ionian and Tyrrhenian coasts, soaring peaks, ravines, hill top towns and castles in the interior. Greek, Roman, Byzantine, Norman and Spanish invaders all left their mark on the region thanks to its strategic location that linked ancient Rome to the eastern Byzantine empire.  Neglected after Italian unification, it first came to the public eye following its portrayal by Carlo Levi in his iconic book Christ Stopped at Eboli, written after his exile by the Fascist regime to Aliano.

This is home of ‘cucina povera’ that echoes isolation and hard times. Many dishes are reflective of a nothing goes to waste attitude with the region deeply entrenched in peasant traditions, and whose impenetrable mountains have left this part of Italy untouched compared to other regions.  Expect traditional, rustic cuisine, strongly influenced by its history. Inland, osterie serve local specialties such as fave e cicoria, orecchiette pasta generously mixed in a spicy tomato sauce cooked with Lucanian sausages that are seasoned with fennel and chilli.  We all know that no meal in Italy is complete without a good wine and although the Basilicata region may not produce the most wine, its Aglianico del Vulture (DOC) is generally regarded as one of the best red wines of southern Italy.

Matera’s famous bread is delicious freshly-baked but is also used in local dishes such as la cialledda fredda and il pane cotto.  Abundant are the sun-dried cruschi peppers, crisped in local olive oil and eaten as an aperitivo, or coarsly ground to add flavour to pasta or egg dishes.

The photos below are of Matera a wild, uncultivated archaeological park nested next to white-washed ancient grottos dating back to B.C, and awarded UNESCO World Heritage status in 1993.  It makes this city feel rather biblical and has been a backdrop to many epic movies, most of which have been set in biblical times: 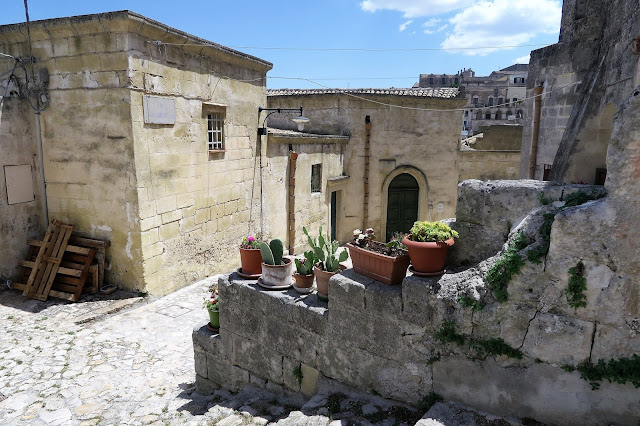 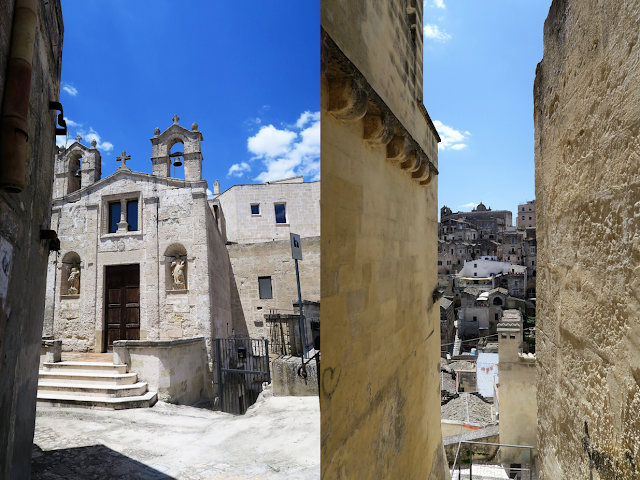 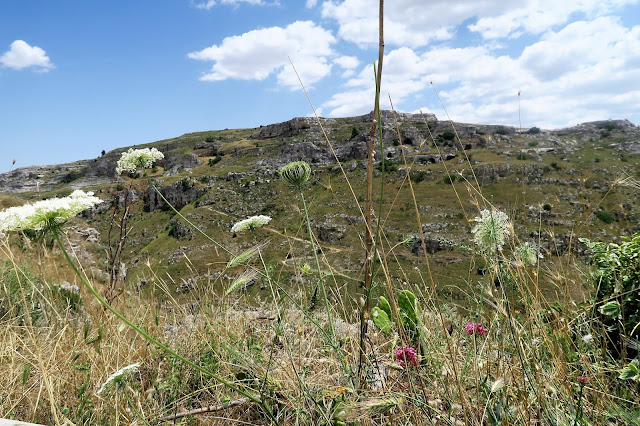 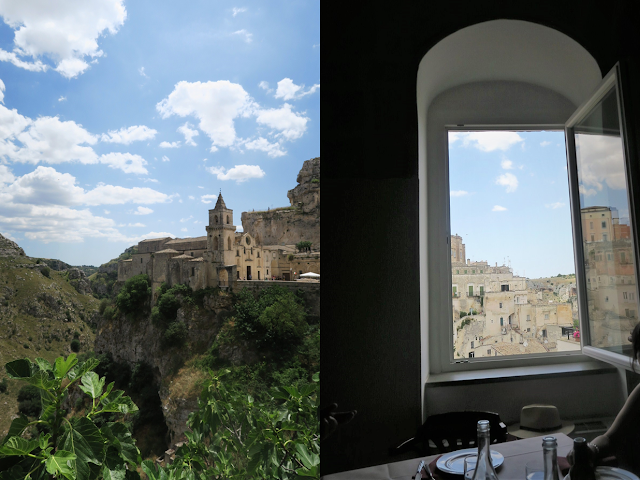 My most memorable seasonal dishes eaten in this region were stracinati with ricotta salata & peperoni cruschi as well as spaghetti alla chitarra with a cream of broad bean and mushroom sauce.  These simple flavours have continued to inspire many dishes cooked at home. Here I share a recipe that uses ingredients mamma cooks with and typical of Basilicata. I hope it inspires you to visit this captivating region or at least try this flavoursome dish. 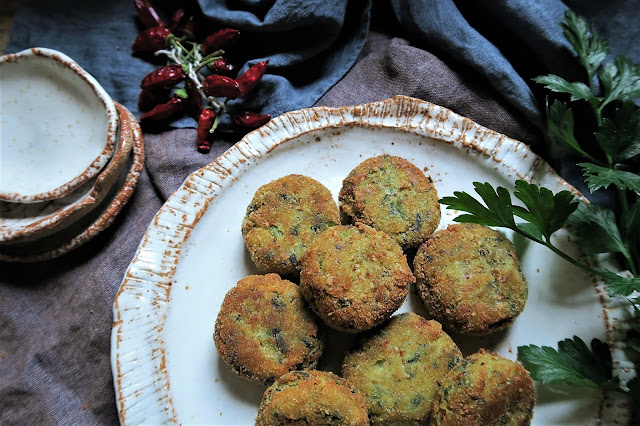 Prepare the broad beans by soaking them in cold water the night before.  Drain them the following day and place then in a sauce pan of cold water along with the crushed garlic.  Water should just cover them.  Add a teaspoon of salt and bring to the boil.

Reduce heat and stir until the broad beans begin to absorb the water and dissolve into a puree. Continue to stir making sure the puree does not stick to the base.  You will know once the broad bean puree is cooked by its mash like texture. Turn off the heat and allow to cool in the pot.  The puree will continue to absorb the moisture and thicken.

Meanwhile clean the chicory and discard the hard ends of the stalks. Wash and cook in boiling salted water. Drain and squeeze to remove excess moisture. Chop coarsely and sauté in a pan with extra virgin olive oil and chilli to taste.

Crumble the bread crumbs finely and place in a bowl with the chicory, cooled mashed broad beans, beaten egg, pecorino cheese and salt if necessary.

Work with a fork until the dough is well combined and not too sticky.  If too soft, gradually add more breadcrumbs to adjust the consistency. Let the dough rest in the fridge for at least an hour.

Once chilled form the patties with your hands, pass them in the breadcrumbs to coat well and place them on a tray.  They can be prepared ahead of time and stored covered in the fridge.

In a fry pan add enough oil for shallow frying.  Heat the oil and fry the patties until golden on both sides. Drain on kitchen paper and enjoy hot or warm.

While recipe testing, I couldn't resist creating some crostoni with the individual ingredients piled on top and a drizzle of olive oil. 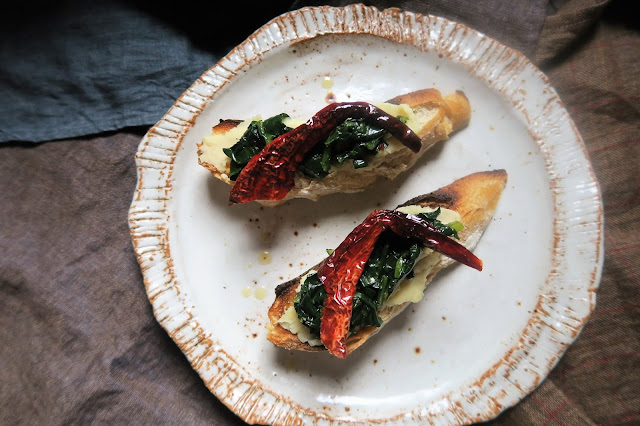